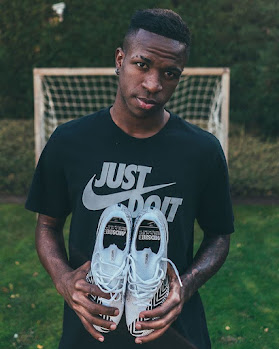 Vincius José Paixo de Oliveira Jnior often known as Vincius Jnior or Vini Jr., is a Brazilian professional footballer who currently plays as a winger for Real Madrid and the Brazil national team.

Vincius, who was born in So Gonçalo, started his professional career at Flamengo, where he made his senior debut in 2017 at the age of 16. A few weeks later, Vincius was transferred to Real Madrid of La Liga, where he signed a R$191 million (€45 million) agreement, which became effective after his 18th birthday, setting a new national record for an under-18 player.

Vincius Junior began his football career in 2006, when his father led him to the Flamengo branch offices in the Mutuá area of So Gonçalo, where he lived. He was listed as a left-back on his club's website.

Vincius, who came from an impoverished Afro-Brazilian family, moved to Aboliço with his uncle Ulisses to be closer to Ninho do Urubu (the 'Vultures' Nest'). He began to get financial assistance from Flamengo and other businesses.

Vincius underwent a futsal tryout with Flamengo when he was nine years old in 2009. His promise was noticed by the club, but due to his youth, he was requested to return the next year. He did not return, though, since he decided he wanted to play football rather than futsal. Vincius completed his Flamengo football exams in August 2010. 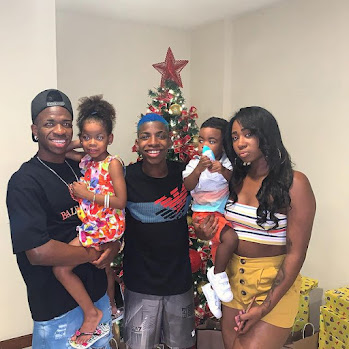 Vincius made his Flamengo debut in a Brazilian Série A 1–1 tie against Atlético Mineiro on May 13, 2017, as an 82nd-minute replacement. He extended his contract with the club from 2019 to 2022 two days later, with a hefty pay rise and a buyout clause that was increased from €30 million to €45 million. This contract extension was announced as part of Vincius' move to Real Madrid, a deal made in Gávea that week between the two clubs with an obligation to sell the young player in July 2018.

In a 5–0 triumph for Flamengo in the Copa Sudamericana second round leg 2 encounter against Palestino on August 10, 2017, Vincius scored his first professional goal. He scored one goal in the 72nd minute, only 30 seconds after coming on as a replacement. In a 2–0 win against Atlético Goianiense on August 19, he scored his first Brazilian Série A goals for Flamengo. 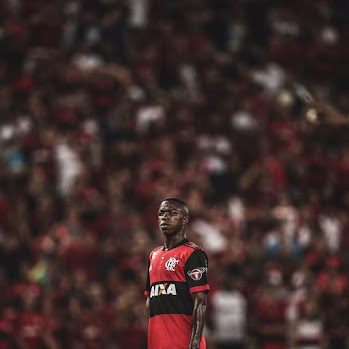 Real Madrid inked a contract to acquire Vincius on May 23, 2017, which would take effect after his 18th birthday on July 12, 2018. (as age 18 is the minimum age for international transfer). He was sold for €46 million, the second most expensive player sale in Brazilian football history (behind only Neymar), the greatest money earned by a Brazilian team for a transfer, and the highest price ever paid by a club for a footballer under the age of 19 at the time. He was supposed to return to Brazil on loan in July of this year.

He was formally unveiled as a Real Madrid player on July 20, 2018. Squad number 28 was assigned to him. He made his debut against Atlético Madrid on September 29, coming on as an 87th-minute replacement in a goalless draw. Vincius made his debut start in a 4–0 Copa del Rey away triumph over Melilla on October 31, assisting Marco Asensio and lvaro Odriozola in a performance that Marca dubbed 'Man of the Match.'

He scored his first goal in a 2–0 victory over Real Valladolid on November 3rd, 10 minutes after coming on as a replacement. Between his debut on September 29 and February 7, 2019, he scored four goals. He tore a ligament in a defeat to Ajax on March 6, ending his season.

Vincius scored two goals in a 3–1 triumph over Liverpool in the first leg of the 2020–21 UEFA Champions League quarterfinals on April 6, 2021. 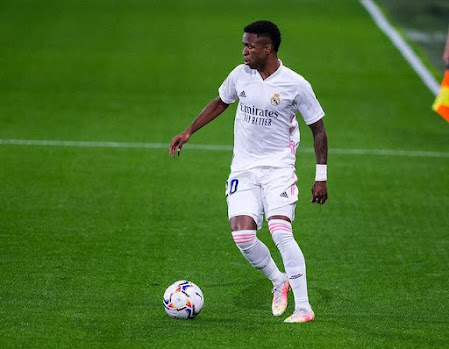 Vincius Jnior was picked up for the South American U-15 Championship by coach Guilherme Dalla Déa on October 30, 2015. Vincius and Brazil won the U-15 World Cup, and he was the tournament's second leading scorer with seven goals. He was voted tournament player of the year and continued to perform well, leading to Flamengo signing him at the age of 16. Vincius was called up for a friendly against Chile U-17 on June 24, 2016, he scored two goals and added two assists in a 4–2 triumph.

Vincius made his South American U-17 Championship debut for Brazil in March 2017, scoring a goal in a 3–0 win over Peru. He scored two goals in a 3–0 win over Ecuador and two goals in a 3–0 win over Colombia in the final round, sealing Brazil's spot in the 2017 FIFA U-17 World Cup in India, where Brazil (without Vincius Jnior) finished third. Vincius Jnior was awarded the tournament's best player and top goal scorer with seven goals after guiding Brazil to victory in the South American U-17 Championship.

Vincius was called up to the Brazil national team for the first time on February 28, 2019, for friendlies against Panama and the Czech Republic. However, when playing for Real Madrid, he sustained an injury, and David Neres was called up to take his place in March. Manager Tite left him out of Brazil's final 23-man roster for the 2019 Copa América in May. On September 10, he made his senior international debut, coming on as a 72nd-minute replacement in Brazil's 1–0 loss to Peru. 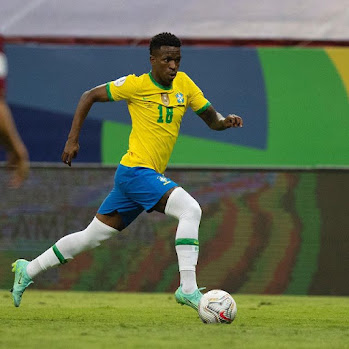 Vincius was characterised as a 'zippy left winger or second striker' by ESPN journalist Dermot Corrigan shortly after his arrival at Real Madrid in July 2018. He was characterised by El Mundo 'A player who is perpetually tortured, teetering on the precipice between genius and mockery.

As a winger unable to coordinate his legs and feet, judgement constantly hovers over him, but he never quits up, which is a fantastic trait '.. Although he is most often utilised on the left wing, he is capable of playing anywhere along the front line and has also played on the right and in the centre.

Despite his small frame, he is recognised for his mobility, ability to rush at defences, change directions fast, and defeat opponents in one-on-one scenarios when in possession of the ball. He is a small, energetic, clever, hard-working, and agile winger with a low centre of gravity, as well as outstanding passing and awareness, and is regarded as a promising young player.

Furthermore, he is recognised for his vision for the last pass and ability to assist teammates; while he is capable of scoring goals himself, commentators have mentioned his shooting and goalscoring as areas in need of development. Vincius was ranked 39th on The Telegraph's list of the best under-21 players in the world in June 2017. He was the only player from South America to make the list at the time.

Former Argentina international frontman José Luis Calderón attributed Vincius' success in November 2018 'His overall excitement, his capacity to make things happen, the joy and positive vibes he communicates, his speed, the fact that he is unique, and his boldness. To summarise, he possesses a spark that may be utilised by a squad that has struggled in recent games '.. 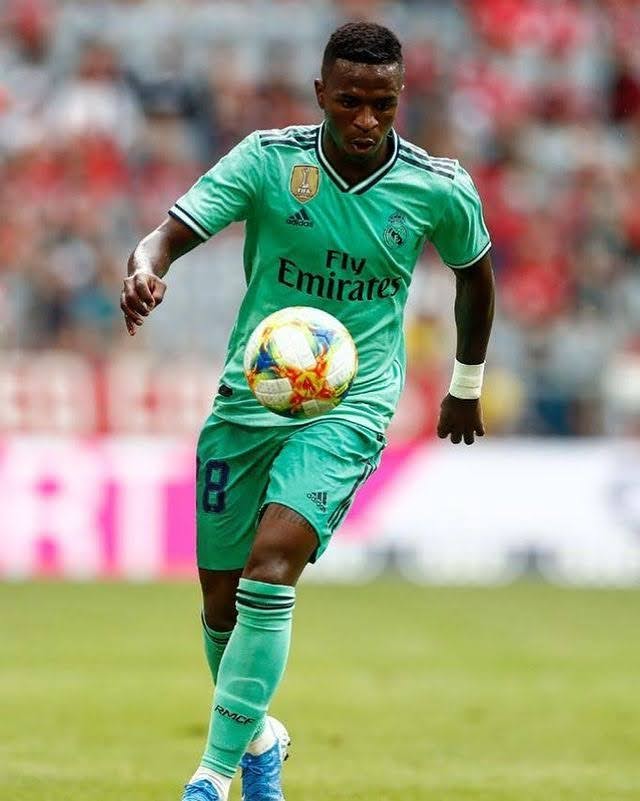 Best Player in the 2017 South American U-17 Championship

2017's best scorer in the South American U-17 Championship 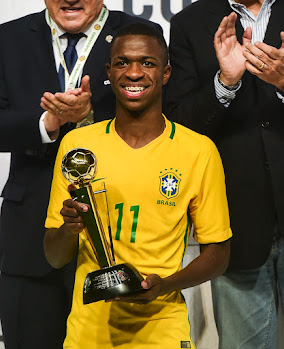