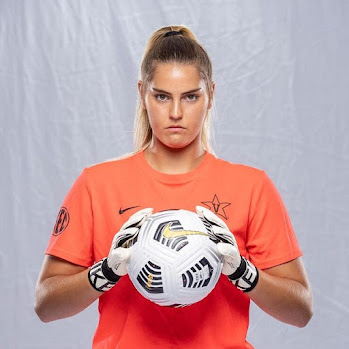 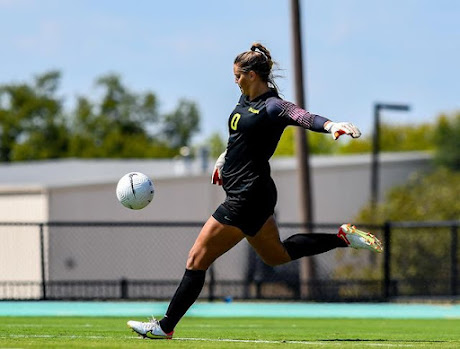 Sarah Fuller is a North Texas Mean Green collegiate soccer goalkeeper. She started her collegiate career with the Vanderbilt Commodores, for whom she also served as a placekicker.

As a senior in 2020, Fuller started for Vanderbilt's soccer team and helped lead the Commodores to the Southeastern Conference tournament title (SEC). Six days later, on November 28, 2020, she became the first woman to participate in a football game for a Power Five conference team when she kicked off for the Commodores against Missouri.

Fuller became the first woman to score in a Power Five football game two weeks later when she kicked an extra point against Tennessee. The next season, she transferred to North Texas as a graduate student.

Fuller was born to 6-foot-2-inch (1.88-meter) Brandon Fuller and 5-foot-10-inch (1.78-meter) Windi Fuller. Fuller's grandfathers are both 6 feet 5 inches (1.96 m) tall. She started playing soccer at the age of five. Fuller was the tallest student in her class, male or girl, from elementary through junior high.

She grew up in Wylie, Texas, and went to Wylie High School, where she was a two-year starter at goalkeeper and was awarded the 2017 District 6-6A Goalkeeper of the Year. In games, Fuller was able to kick the ball beyond 60 yards (55 metres). Her leg strength pleased the school's football coaches, who informed her soccer coach that she could join their squad.

Fuller has interned with the Nashville Adult Literacy Council and the End Slavery Tennessee campaign.

She had also planned to apply for an internship at Play Like a Girl, but she did not do so. In her first football game with Vanderbilt, she had 'Play Like a Girl' written on the back of her helmet as a tribute to the organisation. The non-profit reported $13,000 in contributions the next day, as well as an uptick in individuals asking about helping since her game.

Fuller was asked to attend Joe Biden's inauguration in 2021.

She appeared on the inaugural television special, Celebrating America, and presented Vice President Kamala Harris, the first woman to occupy the position. 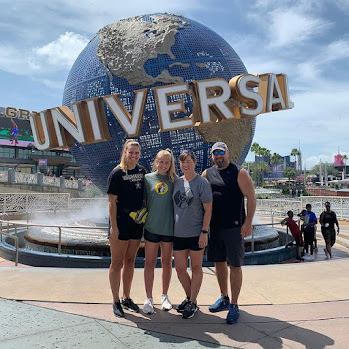 In 2017, Fuller enrolled at Vanderbilt University on a soccer scholarship. She injured her foot the summer before her freshman year, which forced her to miss her first season. Back ailments kept her out as a sophomore, and she was forced to play behind two senior goalkeepers the next season.

In her first three years, Fuller appeared in just two games. The COVID-19 epidemic hit in the spring of 2020, and five exhibition games were cancelled, denying her of the chance to present herself to her coaches. She sustained a stress fracture in her other foot during the summer.

Fuller, a senior in 2020, started the season on the bench. The Commodores were 1–2 at the start of the season until she earned her first career start against South Carolina in October, making six saves. She finished with a 7–2–0 record, 28 total saves, and a 75.5 save percentage.

Her 0.97 goals against average topped the SEC and was seventh all-time at Vanderbilt in a single season. Fuller earned a rare goalkeeper assist in the quarterfinals of the SEC Tournament after kicking a free kick that almost travelled the length of the field, resulting to a goal in a 4–2 victory against Tennessee.

She made three stops in the final game against Arkansas on November 22, 2020, helping the No. 7 seed Commodores win 3–1 and capture their first SEC Tournament title since 1994. She earned a degree in Medicine, Health, and Society in May 2021.

North Texas women's soccer stated on November 13, 2020, that Fuller had signed a contract to join the team in 2021 as she pursued her master's degree in hospital management, a degree that was not offered at Vanderbilt.

Vanderbilt's football team has few choices at placekicker for its upcoming game against the Missouri Tigers on November 28, 2020, due to COVID-19.

Their primary kicker had already dropped out of the season owing to coronavirus concerns, and contact tracing had forced the team's other kickers to sit out. The Commodores' punter could also kick, but he also acted as the team's holder, thus kicking would need a new holder.

Because Vanderbilt did not have a men's soccer team, Commodores football coach Derek Mason went to the women's squad and Fuller. When she was contacted the day after her soccer team's SEC championship game, she agreed to try out for the 0–7 football team rather than return home to Wylie for Thanksgiving.

Mason chose her to be the kicker for the road game in Columbia, Missouri, She was the team's sole kicker on the road.

At the half, Vanderbilt trailed Missouri 21–0. Unsatisfied with the team's lack of excitement on the sidelines, Fuller delivered a halftime address in which she encouraged her colleagues to cheer each other on and support one another.

Coaches later informed her that they had been meaning to say something similar for a long time. She began the second half with a kickoff, a squib kick that travelled 30 yards by purpose.

Fuller was the first woman to play football in a Power Five conference, which are considered the top leagues in college football, and the third woman to play in the Football Bowl Subdivision . The Commodores were defeated 41–0.

She didn't have a chance to make a scoring field goal or an extra point since their offence seldom drove beyond midfield and never got inside the Missouri 30-yard line. For most of the day's games, Fuller trended in the top two on Twitter, and her kick was the #1 video clip of the week on ESPN's digital platform.

Her start resulted in the SEC Network's most-viewed tweet and most-liked Instagram post in its history. She was awarded Co-Special Teams Player of the Week for the SEC.

Fuller stayed with the squad the next week, but Mason was dismissed after a 27–55 overall record as Vanderbilt's coach.

She was scheduled to play in the following game against Georgia, but the game was cancelled due to the SEC's COVID-19 protocols because the Commodores' roster did not meet the minimum requirements. Fuller was one of three kickers on the Commodores' active roster against Tennessee on December 12.

Interim head coach Todd Fitch decided she would handle kicks inside the 10-yard line, while Pierson Cooke—who Mason had removed from extra points after struggling with short kicks earlier in the season—would handle longer-range opportunities.

Following a first-quarter touchdown, Fuller kicked an extra point to become the first woman to score in a Power Five football game; she finished the game 2-for-2 on extra points. Vanderbilt lost 42–17, bringing their season record to 0–9. 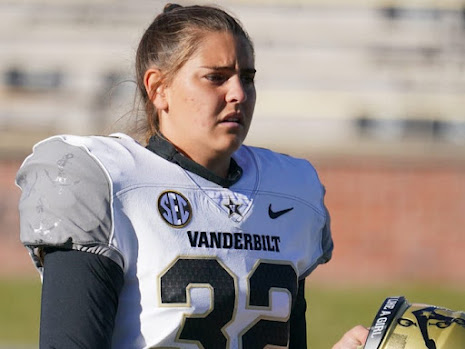