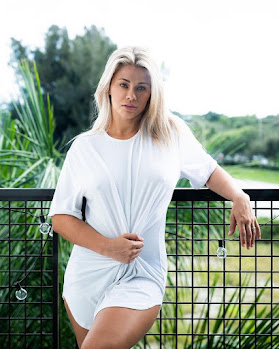 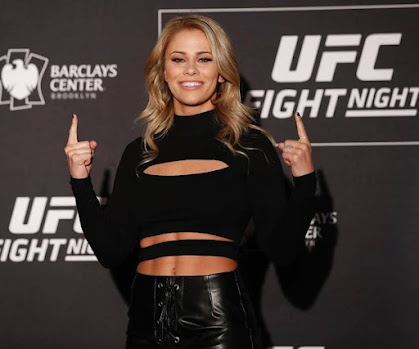 Paige Michelle VanZant is a mixed martial artist, boxer, author, and model from the United States. VanZant was signed to the Ultimate Fighting Championship's flyweight division. VanZant inked a deal to compete solely in the Bare Knuckle Fighting Championship in August 2020. Aside from MMA, she has appeared on the television shows Dancing with the Stars and Chopped.

VanZant was born in Dundee, Oregon, and grew up in Dayton. Her parents owned a dance studio, and she was raised for over 13 years dancing ballet, jazz, and hip hop. She appeared in a Bissell mop commercial as a teen. Growing up, she was considered a tomboy who enjoyed the outdoors; her interests included riding dirt motorcycles and fishing. She was frequently tormented by a gang of females in high school. Students mocked her surname Sletten, which they shortened to 'Slutton.' Because of the persistent bullying, she legally changed her surname to VanZant.

She chose 'VanZant' because it was the last name of one of her mother's students and she liked how it sounded. However, she has stated that this experience is one of the reasons she enjoys martial arts and being able to defend herself.

Her father dubbed her '12 Gauge' because she enjoyed shooting and hunting.

She has walked the runways for Nike and Columbia Sportswear.

VanZant confirmed in May 2018 that she had a breast augmentation, saying: 'I'm a girl who has always wanted her own boobs. They never arrived, so I purchased them.' VanZant married Austin Vanderford, a professional MMA fighter and two-time NAIA All-American and national champion wrestler, in September 2018. Vanderford proposed to VanZant in January 2018 after they had been dating for a year. 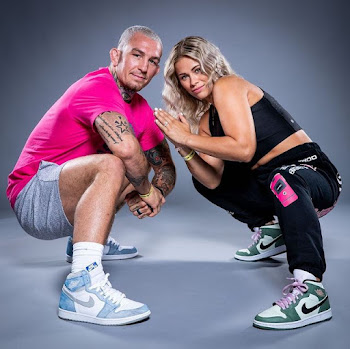 VanZant was looking for a dance studio after moving with her family to Sparks, Nevada, when she came across UFC veteran Ken Shamrock's gym, where she began training in boxing and other martial arts. VanZant made her professional MMA debut on June 30, 2012, at UWF's Tournament of Warriors finale against Jordan Nicole Gaza in Corpus Christi, Texas, where she won by split decision. She defeated Amber Stautzenberger in a unanimous decision at Premier Fight Series 2 on September 22, 2012.

At Invicta FC 4: Esparza vs. Hyatt, VanZant faced Tecia Torres. On January 5, 2013, the event was held at the Memorial Hall in Kansas City, Kansas. VanZant was dominated on the feet for the majority of the fight and was defeated by Torres via unanimous decision.

VanZant was announced as one of 11 women signed by the Ultimate Fighting Championship (UFC) for its newly created Strawweight division in December 2013. It was also announced that she would appear as a cast member on The Ultimate Fighter (UFC), a television reality show, in a tournament to determine the inaugural strawweight champion. However, VanZant was kicked off the reality show on March 31, 2014, because she was only 20 years old, and the minimum age to compete is 21 due to the presence of alcohol in the house.

The UFC announced in August 2014 that VanZant would face Kailin Curran on October 4, 2014, at UFC Fight Night: MacDonald vs. Saffiedine in Halifax, but VanZant suffered a back injury and the fight was rescheduled for UFC Fight Night: Edgar vs. Swanson. VanZant made her UFC debut by defeating Curran via TKO in the third round, earning Fight of the Night honours. VanZant's popularity skyrocketed after he defeated Kailin Curran. VanZant fought Alex Chambers at UFC 191 on September 5, 2015.

She won by armbar submission in the third round after dominating the most of the bout with aggressive punches and grappling. On September 17, 2015, VanZant signed a new contract with UFC. VanZant was scheduled to face Joanne Calderwood at UFC Fight Night 80 on December 10, 2015. Calderwood, however, was pulled from the fight in October and replaced by Rose Namajunas. VanZant was defeated by submission in the fifth round of the one-sided fight.

Following her time on Dancing with the Stars, VanZant returned to the ring on August 27, 2016, to face Bec Rawlings at UFC on Fox: Maia vs. Condit. She won the fight with a flying head kick and a flurry of follow-up punches in the second round. VanZant received her first Performance of the Night bonus award as a result of her victory. 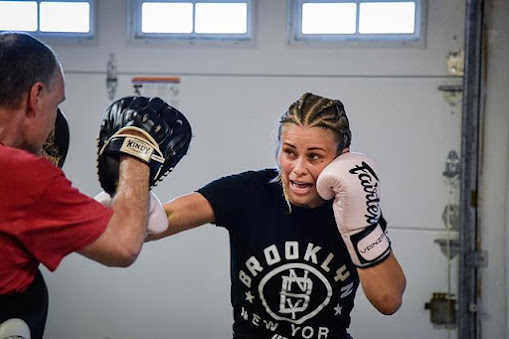 VanZant moved to the 125-pound flyweight division in August 2017 and was scheduled to face Jessica Eye at UFC 216 on October 7. VanZant, however, withdrew from the fight on September 25 due to a back injury, as well as other ailments such as a herniated disc, sinus infection, double ear infection, pink eye, and ringworm. VanZant made her flyweight debut in 2018, when she faced Jessica Rose-Clark on January 14, 2018, at UFC Fight Night: Stephens vs. Choi.

She was defeated by unanimous decision after breaking her arm in the second round while attempting a spinning backfist. VanZant fought Rachael Ostovich on January 19, 2019, at UFC Fight Night: Cejudo vs. Dillashaw after taking a year off due to a broken arm. In the second round, she won via armbar submission. VanZant was briefly linked to a fight with Poliana Botelho at UFC 236 on April 13, 2019.

However, just days after the pairing was made public, VanZant announced that she would be unable to compete due to a fractured right arm. Botelho was still on the card and would face Lauren Mueller. Initially, VanZant was told she wouldn't need arm surgery and would be able to return to the octagon in July. However, she told ESPN in early June that the bone in her arm had not healed and that she would need surgery. She is expected to be out of commission for three months.

VanZant was supposed to face Amanda Ribas at UFC Fight Night 170 on March 14, 2020. VanZant, on the other hand, was forced to withdraw from the fight after fracturing her right arm again (third such time for VanZant). She said that the damage was minor and will recover in 6-8 weeks. VanZant requested that the bout be rescheduled one month later, but Ribas chose to stay at the event, and Randa Markos stepped in as a replacement.

The fight with Ribas was rescheduled to take place on July 12, 2020, at UFC 251. VanZant was defeated in the first round by submission.

The Bare Knuckle Fighting Championship is a bare-knuckle fighting competition.

VanZant signed a four-bout contract with the Bare Knuckle Fighting Championship in August 2020, reportedly worth more than $1 million. 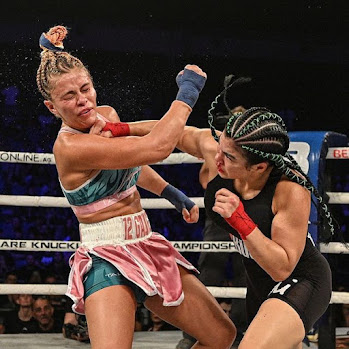 VanZant typically attacks with aggressive grappling before attempting to end the fight with strikes. Her fighting style incorporates ground-and-pound, dirty boxing, and a variety of clinch strikes. She will frequently move the fight toward the fence while standing and use knees, elbows, forearms, punches, and throws. VanZant is known for her constant pressure while grappling. If an opponent gets out of her clinch, she will usually try to close the distance again within a few moments.

Kailin Curran struggled to establish range against VanZant at UFC Fight Night 57. Felice Herrig was frequently taken down by VanZant's grappling throughout their three-round fight. Tecia Torres, the first fighter to defeat VanZant, largely avoided her clinch while attacking with strikes near the centre of the cage. She usually strikes from a distance with high kicks and punches.

She attributes her ability to perform flexible and agile movements in her fights to her dancing background; she demonstrated this when she knocked out Bec Rawlings with a jumping switch kick, earning her a 'Performance of the Night' bonus. VanZant has a blue belt in Brazilian Jiu-Jitsu in addition to her striking abilities. 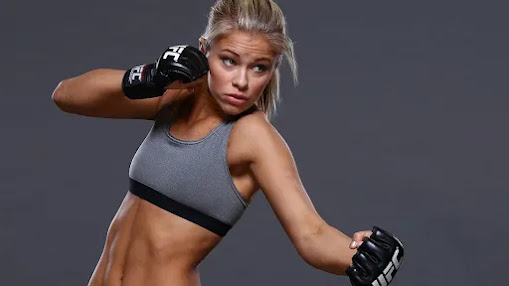 Dancing with the Stars

On March 8, 2016, it was announced that VanZant would be one of the celebrities competing on season 22 of Dancing with the Stars. Mark Ballas, a professional dancer, was her partner. The couple made it to the show's finals and finished second behind model Nyle DiMarco and his partner Peta Murgatroyd.

1 Due to Ballas' back injury during rehearsals, VanZant performed with troupe member Alan Bersten this week.

3 As part of 'America's Switch Up,' VanZant performed with Sasha Farber instead of Ballas for one week only. Ballas shared the stage with Ginger Zee. Maksim Chmerkovskiy, the guest judge, awarded a 4 rating. 5 Because Inaba was the judge coaching VanZant's team during the team-up dance, the viewers scored the dance in her place, with the average score being added to the remaining judges' scores.

VanZant was announced as one of 16 celebrities competing in a celebrity cooking competition on the Food Network TV show Chopped on March 3, 2017. She appeared alongside former NFL player LaMarr Woodley, female Olympic gold medalist fencer Mariel Zagunis, and former Olympic gold medalist figure skater Dorothy Hamill in the 'Star Power: Culinary Muscle' episode. VanZant made it through the appetiser and entree rounds to compete against Hamill in the dessert round. She then defeated Hamill in the dessert round to win Chopped.

Publication of a book

On April 10, 2018, VanZant released her memoir, Rise: Surviving the Fight of My Life. Her rise to fame is chronicled in the book, which includes UFC fights, personal battles, and appearances on Dancing with the Stars. 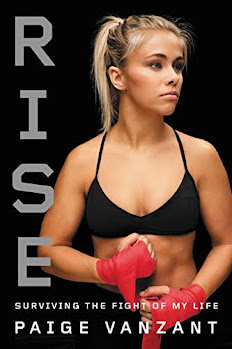