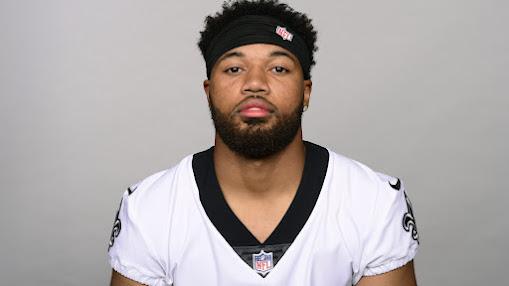 Marshon Demond Lattimore is a cornerback with the National Football League's New Orleans Saints (NFL). He attended Ohio State and was selected 11th overall by the Saints in the 2017 NFL Draft.

Lattimore went to Cleveland's Glenville High School. For the football squad, he was a cornerback and wide receiver. He was one of six contenders for the US Army Player of the Year Award as a senior. Lattimore was a four-star prospect who committed to play collegiate football at Ohio State University.

Due to hamstring issues, Lattimore redshirted his first year at Ohio State in 2014 and participated in just seven games his redshirt freshman year in 2015. He completely healed from his injuries and was able to return to the lineup in 2016. Lattimore was selected First Team All-Big Ten by the coaches on November 29, 2016.

The majority of NFL experts and pundits expected Lattimore to be a first-round selection out of Ohio State. He was invited to the NFL Combine but declined to participate in the bench press, shuttle run, and three-cone drill. He went to Ohio State's Pro Day and just ran positional drills for scouts and representatives.

Despite a history of hamstring problems and just one year of starting experience in college, NFLDraftScout.com, Sports Illustrated, ESPN, NFL analyst Bucky Brooks, and NFL analyst Mike Mayock ranked him as the #1 cornerback prospect in the draught. Pro Football Focus rated Lattimore as the top cornerback.

The Saints were supposed to ease Lattimore into the lineup, allowing him to wait behind starters Delvin Breaux and P. J. Williams while competing for the third cornerback spot on the depth chart against Ken Crawley and De'Vante Harris.

After Breaux sustained a broken fibula on August 16, head coach Sean Payton labelled him the third cornerback after P. J. Williams and Ken Crawley. After Crawley was classified as inactive for both games, he started the first two regular-season games.

Lattimore made his NFL debut against the Minnesota Vikings on Monday Night Football, recording four solo tackles in the 29–19 defeat. Lattimore took over as starting cornerback before Week 4 after Williams was demoted due to a disciplinary problem.

Lattimore made five combined tackles, deflected two passes, intercepted a pass attempt from quarterback Matthew Stafford, and returned it for a 27-yard score in a 52–38 win against the Detroit Lions two weeks later. It was his first interception and score of his career. He was awarded the NFC Defensive Rookie of the Month for the month of October on November 2, 2017.

Lattimore missed Weeks 12–13 after sustaining an ankle injury against the Washington Redskins in Week 11. Lattimore was awarded the NFL Defensive Rookie of the Year in 2017 and earned an overall grade of 90.5 from Pro Football Focus, ranking fourth among all cornerbacks. On the NFL Top 100 Players of 2018, he was rated 82nd by his peers, one of three rookies to make the list.

The next week, he had four solo tackles and a pass deflected in the Vikings' 29–24 NFC Divisional playoff road defeat, which became known as the Minneapolis Miracle.

Lattimore mainly covered wide receiver Mike Evans in the season opener against the Tampa Bay Buccaneers, who caught seven receptions for 147 yards, including a 50-yard touchdown. The Saints were defeated by a score of 48–40 due to poor defensive performance. Following the game, Lattimore stated: 'It's not going to get me down. Everyone is beaten. We needed to be smacked in the face once to realise we're not on the level we believe we are.'

In a 48–7 win against the Philadelphia Eagles in Week 11, he recorded his first interception of the season off Carson Wentz. Lattimore caused Amari Cooper to fumble and recovered the ball two weeks later against the Dallas Cowboys. Following the play, Lattimore donated $23 to the Salvation Army's Red Kettle in the endzone as the Saints fell 13–10.

Two weeks later, in a 28–14 road win against the Tampa Bay Buccaneers, Lattimore intercepted Jameis Winston in the endzone and forced a fumble off Chris Godwin. In 16 games and starts, Lattimore completed his second professional season with 59 combined tackles, 12 pass deflections, two interceptions, four forced fumbles, and three fumble recoveries. In 2018, he earned an overall grade of 74.1 from Pro Football Focus, which placed him 20th among all qualifying cornerbacks.

Lattimore had six tackles in the NFC Championship game against the Los Angeles Rams, which ended in a controversial overtime defeat of 26–23.

Lattimore had a team-high 12 tackles in a 33–27 away win against the Seattle Seahawks in Week 3. Three weeks later, in a 13–6 road win against the Jacksonville Jaguars, he got his first interception of the season off Gardner Minshew. Lattimore was selected to his second Pro Bowl, however he declined due to injury. 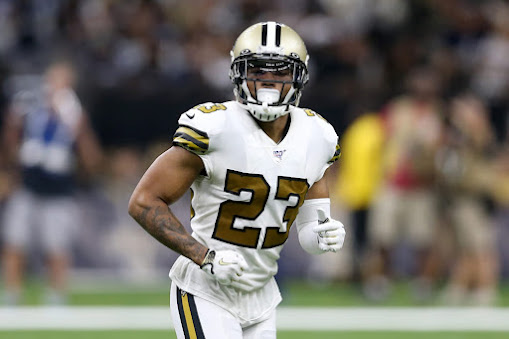 On Monday Night Football in Week 5 against the Los Angeles Chargers, Lattimore made the game-winning tackle on wide receiver Mike Williams just short of the first down marker on fourth down during the 30–27 overtime victory.

During the 26–23 overtime victory against the Chicago Bears in Week 8, Lattimore got his first interception of the season off a ball made by Nick Foles. 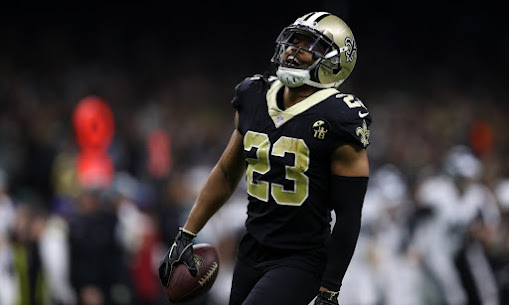 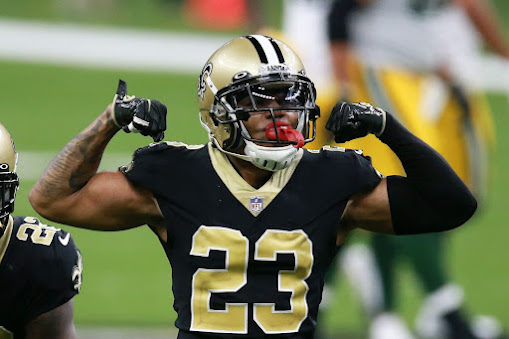 On March 25, 2021, Lattimore was arrested for having a loaded pistol that was thought to be stolen, and he was charged with having a hidden weapon and receiving stolen goods, both of which are fourth-degree felonies. He was arrested and brought into the Cuyahoga County Jail, where his bail was set at $5,000.