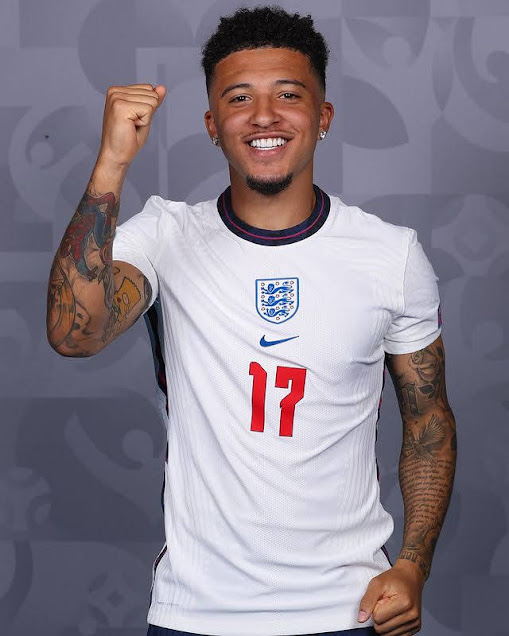 Jadon Malik Sancho is an English professional footballer who represents Manchester United in the Premier League and the England national team as a winger. He is noted for his trickery, speed, and use of feints in one-on-one situations. He is a very technical, creative player. He was included to the 40-man shortlist for the 2020 Golden Boy after finishing second in the 2019 Kopa Trophy.

Sancho, a former Watford and Manchester City youth player, earned his first professional deal with Borussia Dortmund in 2017. He established himself as a first-team regular in his second season and was selected to the 2018–19 Bundesliga Team of the Season. Sancho won his first title ahead of the 2019–20 season, defeating Bayern Munich in the DFL-Supercup.

Sancho was born in Camberwell, Greater London, to Trinidad and Tobago-born parents. He grew up in Kennington. After playing in youth competitions together, he became acquainted with another aspiring player Reiss Nelson, who lived nearby. He was a Chelsea fan as a kid, idolising Ronaldinho and Frank Lampard.

Sancho joined Watford when he was seven years old. He moved into Watford's housing and began attending their partner school Harefield Academy as a boarder at the age of 11 due to problems with travelling across London to the club's academy. He informed his Watford under-15s coach about his desire to play for England when he was 14 years old.

He joined Manchester City at the age of 14 in March 2015 for an initial price of £66,000 under the EPPP, which could rise to £500,000 with add-ons. Sancho continued to excel at Manchester City's academy, and was one of a trio of prospects named by chairman Khaldoon Al Mubarak to be fast tracked into the senior team in May 2017. Sancho was left out of Manchester City's pre-season tour squad in July 2017 owing to a disagreement about playing time guarantees in a new contract.

Sancho joined German Bundesliga club Borussia Dortmund on August 31, 2017, for an undisclosed price, and was quickly incorporated into the first-team squad. He subsequently said that his prior relocation experiences with Watford and Manchester City gave him confidence in making the move abroad. Sancho made his Dortmund debut against Eintracht Frankfurt on October 21, going on as a substitute with six minutes remaining to become the club's first Englishman to play in the Bundesliga.

Sancho made his Bundesliga debut for Dortmund on January 14, 2018, when he struck the post in a goalless draw with VfL Wolfsburg. On April 21, 2018, he scored his first professional goal. It was the first goal of a 4–0 Bundesliga victory over Bayer Leverkusen, and he also assisted on two other goals in the same game.

In a 3–3 tie with Hoffenheim on February 9, 2019, he became the youngest player in Bundesliga history to score eight goals in a single season, beating Christian Wück's record. He eclipsed Lukas Podolski's record of being the youngest player to score nine Bundesliga goals when he scored in a 3–2 win over Bayer Leverkusen later that month, at the age of 18 years and 336 days.

Sancho scored a brace in Dortmund's 2–1 win against Mainz on April 13, becoming the club's youngest player to score at least 10 goals in a single Bundesliga season. Sancho was selected to the 2018–19 Bundesliga Team of the Season after a spectacular league season in which he scored 12 goals and contributed 14 assists.

Sancho scored his first career hat-trick in a 6–1 away win over SC Paderborn on May 31, 2020. After scoring his first goal, he took off his shirt to show a shirt bearing the phrase 'Justice for George Floyd,' a black man who had been killed earlier that week in Minneapolis by a police officer who squatted on Floyd's neck until he went unconscious. 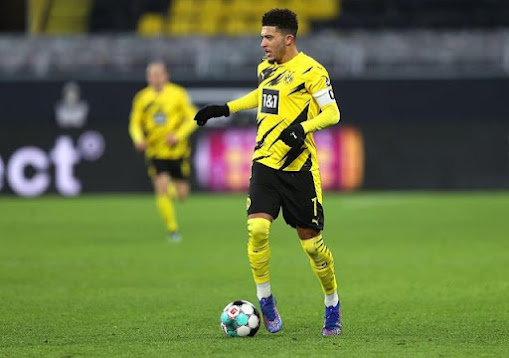 Manchester United and Borussia Dortmund confirmed on July 1, 2021, that they had struck an agreement for Sancho's move, subject to him signing a contract and passing a medical, both of which were expected to happen following UEFA Euro 2020.

Sancho signed a five-year deal with the option of a year extension on July 23, 2021, and the transfer was finalised on July 23, 2021. He was handed the number 25 jersey, which had previously belonged to Odion Ighalo. He made his debut as a substitute for Daniel James in a 5–1 home league win against Leeds United on August 14, 2021. 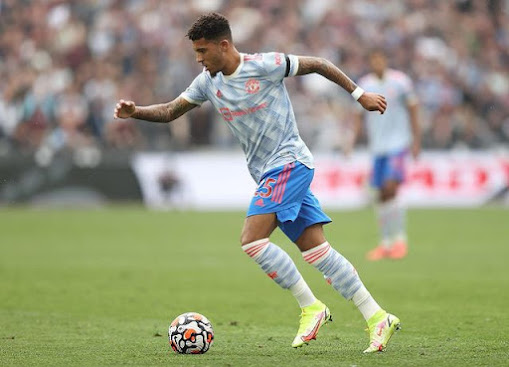 A career in the international arena

Sancho has represented England at the under-16, under-17, and under-19 levels.

Sancho was awarded player of the tournament for his achievements as part of the England under-17 squad that reached the final of the UEFA European Under-17 Championship in May 2017. Sancho was chosen in England's team for the 2017 FIFA U-17 World Cup in September 2017, but his new German club refused to invite him up.

The two parties finally came to an understanding that he would be available for the group stages of the competition, but his participation in the knockout rounds was not assured if England advanced. He scored twice in England U17's debut encounter, against Chile, on October 8, 2017. He was pulled from the campaign by Borussia Dortmund on the 16th of October, during England's round of 16 match against Japan.

Sancho was called up to the England U19 squad for the first time on November 2, 2017, to play in qualification matches for the 2018 UEFA European Under-19 Championship against the Faroe Islands, Iceland, and Group 8 host-nation Bulgaria.

He made his U19 debut in a 6–0 triumph over the Faroe Islands, playing for seventy minutes before being replaced by Ben Brereton; he then replaced Brereton in the 66th minute of the game over Iceland, ensuring advancement to the elite round. He helped England win their group by scoring the game's only goal against Bulgaria. Sancho scored the last goal in England's 4–1 triumph against Hungary in the opening match of the elite round on March 21, 2018, after coming on as a replacement for Brereton.

Sancho was called up to the England senior team for the first time on 4 October 2018 in preparation for UEFA Nations League matches against Croatia and Spain, following an excellent start to the 2018–19 season. On October 12, he made his debut as a 78th-minute substitute against Croatia in a 0–0 away draw.

Sancho came in as a 120th-minute replacement for Kyle Walker during the UEFA Euro 2020 Final against Italy on July 11, 2021. In the following shoot-out, he took England's fourth penalty, which Gianluigi Donnarumma saved. Following the 3–2 penalty shootout loss, racially unpleasant remarks were sent to Sancho, Marcus Rashford, and Bukayo Saka on social media. 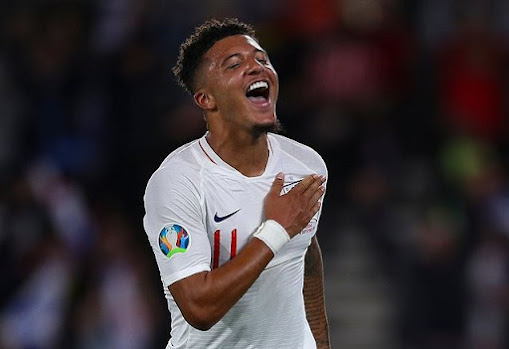 Sancho can play on either wing of an attack in a Borussia Dortmund 4–2–3–1 system as a second striker or wide midfielder. Sancho has benefited from Dortmund's 'young player initiative,' which has allowed him to play in the attack's focal point with a nucleus of promising young players such as Erling Haaland, Gio Reyna, and Jude Bellingham.

Sancho is a highly technical and creative player who is noted for his trickery, speed, and use of feints in one-on-one situations. He has been dubbed one of the finest young players in the world. 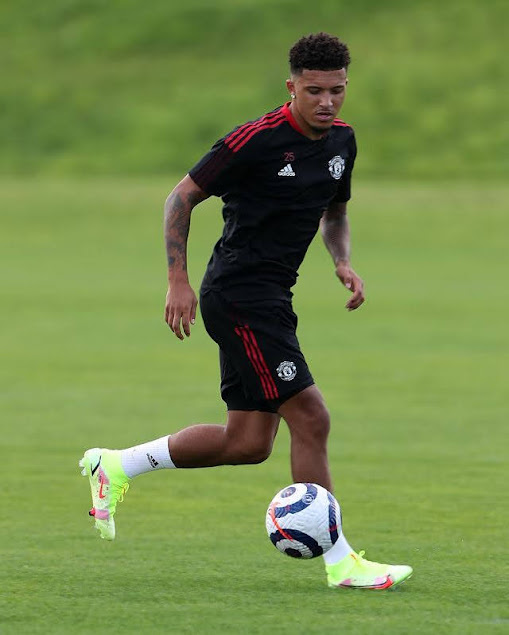