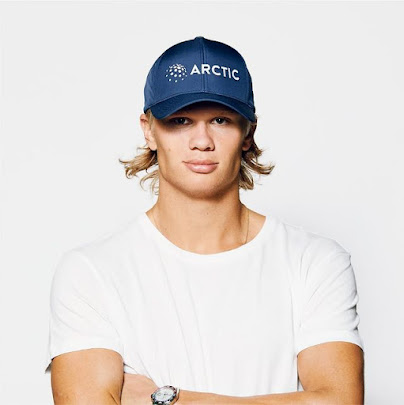 Erling Braut Haaland is a Norwegian professional footballer who plays as a striker for Bundesliga club Borussia Dortmund and the Norway national team. Haaland, a prolific goal scorer, is known for his speed, agility, and power, garnering him the moniker 'The Terminator' from many of his fans. He is widely regarded as one of the greatest strikers in the world.

Haaland began his career with his local club Bryne in 2016, then transferred to Molde the following year, where he played two seasons until joining with Austrian club Red Bull Salzburg in January 2019. He won two Austrian Bundesliga championships and one Austrian Cup during his time with Salzburg. During the 2019–20 season, Haaland became the first youngster to score in five straight UEFA Champions League games. In December 2019, he finalised a move to Borussia Dortmund for a price believed to be in the region of €20 million.

Haaland also received the Golden Boy award for 2020. In 2020–21, he was instrumental in Dortmund's DFB-Pokal victory, was named Bundesliga Player of the Season, and ended as the Champions League's top scorer.

Following the 2019 FIFA U-20 World Cup, in which Haaland won the tournament's Golden Boot after scoring a tournament-record nine goals in a single match, he made his senior squad debut in September 2019.

Haaland was born on July 21, 2000, in Leeds, England, when his father, Alf-Inge Hland, was playing for Leeds United in the Premier League at the time. He moved to Bryne, Norway, when he was three years old, from his parents' homeland. As a youngster, Haaland participated in a variety of sports, including handball, golf, and track and field, in addition to football. He also allegedly set a world record in his age group for the standing long jump when he was five years old, with a distance of 1.63 metres in 2006.

Haaland is the son of former Nottingham Forest, Leeds United, and Manchester City defender Alf-Inge Hland and former women's heptathlon athlete Gry Marita Braut. Jonatan Braut Brunes, his cousin, plays forward for Lillestrm. Brunes became the youngest player ever to play for Bryne in a game against KFUM Oslo on 16 May 2016, at the age of 15 years, 9 months, and 9 days, breaking the previous record set by Haaland four days earlier. Albert Tjland, his younger cousin, is also a player, having scored over sixty goals in less than forty games for Molde's junior squad.

In a February 2017 interview with the Norwegian daily Aftenposten, Haaland said, 'The goal is to win the Premier League with Leeds.' Flow Kingz, a group comprised of Haaland and his Norway U-18 teammates Erik Botheim and Erik Tobias Sandberg, released the music video 'Kygo Jo' on YouTube on August 30, 2016. The video has received over 5 million views and 150 thousand likes by 2020.

Meditation is something Haaland loves, according to him. In February 2020, after scoring his second goal in Dortmund's first-leg Champions League encounter against Paris Saint-Germain, he celebrated by imitating a 'zen' posture in reference to his meditation practise. However, Dortmund would lose and be eliminated in the second leg, with PSG scorer Neymar imitating Haaland's celebration after his goal and the rest of the French club's team joining in on mimicking the 'zen' stance in their post-match celebrations.

This was allegedly done as a jab at Haaland for an alleged social media post he made before to the game in which he referred to the host city, Paris, as 'his city.' Despite several sources suggesting that Haaland's article was a forgery, he said that the PSG celebrations did not upset him, saying, 'I believe they helped me a lot to get meditation out there in the world and to show the entire world that meditation is a vital thing, so I'm grateful.' 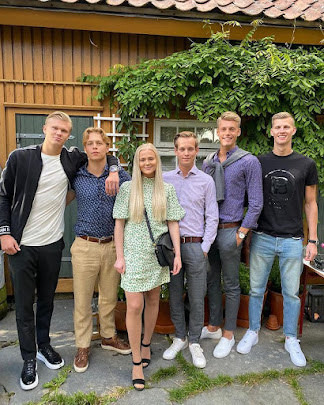 Haaland began his football career at the age of five at the Bryne FK academy. Alf Ingve Berntsen, Haaland's former youth coach, said of his early potential in an interview with Goal.com:

I first met Erling when he was five years old and started indoor training with a group that was a year older... The first two touches he made resulted in goals. Despite the fact that he had never played for the club before, he was outstanding from the start. He began playing in his own year group, but since he was so much better than the rest, we promoted him to Under-6.

After being used as a winger at first, Berntsen moved Haaland to his preferred centre striker position after a few games. Despite failing to score in his first season at Bryne, Haaland was given a trial by German club 1899 Hoffenheim before joining Molde FK under Ole Gunnar Solskjr. For Bryne, Haaland appeared in sixteen senior games.

Molde signed 16-year-old Haaland on February 1, 2017. On April 26, 2017, he made his debut for the club in a Norwegian Cup match against Volda TI, scoring on his debut in a 3–2 victory. Haaland made his Eliteserien debut against Sarpsborg 08. He came in as a 71st-minute replacement. After getting a yellow card in less than a minute of play, Haaland scored the game-winning goal for Molde in the 77th minute, his first league goal. On September 17, he scored the game-winning goal in a 3–2 victory against Viking FK.

Following the game, Haaland was chastised by teammate Björn Bergmann Sigurarson for celebrating his goal in front of Viking fans. Haaland ended his debut season at Molde with four goals in twenty games.

Haaland won the Eliteserien Breakthrough of the Year title in 2018 for his achievements in the Eliteserien. He completed the 2018 season as Molde's leading goal scorer, with sixteen goals in thirty games across all competitions. 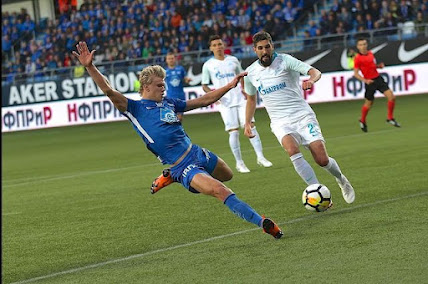 Red Bull Salzburg confirmed on August 19, 2018, that Haaland will join the team on January 1, 2019, on a five-year deal. According to The Athletic's Phil Hay, Haaland was also approached by his father's old club Leeds United before to his transfer to Salzburg. He made his club debut on 17 February, in the 2018–19 Austrian Cup quarter-finals against Wiener Neustädter, and scored his first goal on 12 May, in the Austrian Bundesliga 2–1 victory over LASK.

On 19 July, he scored his first hat-trick for the club in a 7–1 Austrian Cup triumph against SC-ESV Parndorf, and on 10 August, he scored three goals in a 5–2 league victory over Wolfsberger AC. On 14 September, he scored his third hat-trick for Salzburg in a 7–2 win against TSV Hartberg; this was Haaland's sixth straight league goal, with eleven total goals during this time period. Three days later, Haaland made his UEFA Champions League debut against Genk, scoring three goals in the first half in a 6–2 triumph, his fourth hat-trick of the season.

On November 27, Haaland came off the bench to score again against Genk, joining Del Piero, Serhiy Rebrov, Neymar, Cristiano Ronaldo, and Robert Lewandowski as the only players to score in the first five games of a Champions League group stage, and became the competition's first teenager to do so. However, he was unable to hit the back of the goal in Salzburg's last group encounter against Liverpool, as his team was defeated 2–0 and ousted from the tournament. This was Haaland's last game for the club; he left with 29 goals, 28 of which came in just 22 appearances during the 2019–20 season. 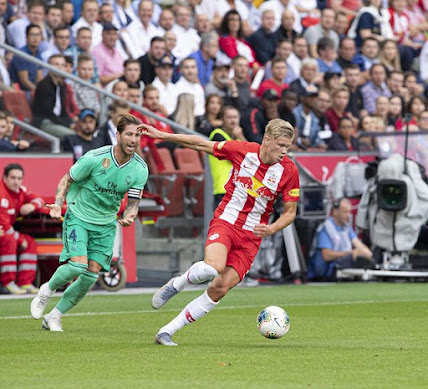 Despite being a rumoured target of Manchester United and Juventus, Haaland signed a four-and-a-half-year deal with German Bundesliga club Borussia Dortmund on 29 December 2019, three days before the winter transfer market began, for a price believed to be in the region of €20 million.

On 18 January 2020, Haaland made his Dortmund debut away against FC Augsburg, coming on as a second-half replacement and scoring a hat-trick inside 23 minutes of a 5–3 victory. After Pierre-Emerick Aubameyang, he became just the second player in Dortmund history to score three goals in his Bundesliga debut. Six days later, Haaland returned to the bench for Dortmund's encounter against 1. FC Köln, his second club appearance. He scored after twelve minutes and added another 10 minutes later to lead his team to a 5–1 win.

Haaland became the first Bundesliga player to score five goals in his first two games, as well as the quickest to do it (56 minutes played). Despite just playing for an hour in the league, he was named Bundesliga Player of the Month in January. On 1 February, Haaland scored a brace against Union Berlin, becoming the first player in history to score seven goals in their first three Bundesliga games.

Haaland scored a brace in Dortmund's season-opening 3–0 victory against Borussia Mönchengladbach on September 19, 2020. He equalised Dortmund's 2–3 Der Klassiker loss to Bayern Munich in the DFL-Supercup on 30 September, and he scored again against Bayern when the teams played in the league on 7 November, this time losing 2–3. Haaland scored four goals in 32 minutes in a 5–2 away triumph over Hertha BSC on November 21. With five goals in November, he was named Bundesliga Player of the Month for the second time.

Haaland continued his Champions League goalscoring streak, scoring six times in the first four matches of the 2020–21 group stage, with his brace in a 3–0 win over Club Brugge on 24 November making him the fastest player to record fifteen (and then sixteen) Champions League goals; he had reached this benchmark with only twelve appearances in the competition. However, only hours before Dortmund's fifth group game against Lazio on 2 December, the club revealed that Haaland had sustained a hamstring injury that would keep him out until until the new year.

Haaland would score another brace against Sevilla in Dortmund's second leg encounter on 9 March, drawing 2–2 and advancing to the Champions League quarter-finals 5–4 on aggregate. With just fourteen matches played, he became the competition's quickest and youngest player to achieve twenty goals, as well as the first person to score multiple times in four consecutive Champions League appearances. After missing two matches due to severe bruising, Haaland returned to Dortmund's starting lineup on 13 May for the 2021 DFB-Pokal Final, scoring a brace in the club's 4–1 victory against Leipzig.

He completed the season with 41 goals in all competitions, including 27 in the Bundesliga, earning him the fan-voted Bundesliga Player of the Season title, and he finished the season as the top scorer in the Champions League with 10 goals, subsequently being named the competition's best striker.

On 7 August 2021, Haaland began the 2021–22 season with a hat-trick against Wehen Wiesbaden in the first round of the DFB-Pokal. A week later, on Bundesliga matchday one, he scored twice and assisted on three goals as Dortmund defeated Eintracht Frankfurt 5–2. 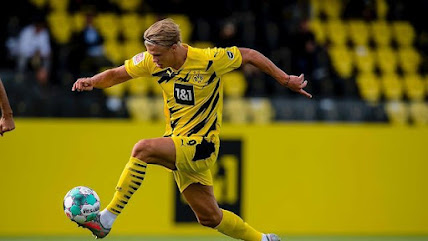 Haaland is a member of the Norwegian national team and has represented them at different age levels. On March 27, 2018, while playing for Norway's under-19 team, Haaland scored a hat-trick against Scotland in a 5–4 win, enabling his nation qualify for the 2018 UEFA European Under-19 Championship. During the tournament finals on July 22, 2018, Haaland scored a penalty against Italy in a 1–1 tie.

Haaland scored nine goals in Norway's under-20 team's 12–0 victory against Honduras on May 30, 2019, at the 2019 FIFA U-20 World Cup in Lublin, Poland. This was Norway's largest ever U-20 victory, as well as Honduras' greatest ever loss. Haaland also established a new U-20 World Cup record for most goals scored by a single player in a match, resulting in the tournament's largest victory by any team in its history. Despite the fact that the Norwegians were eliminated in the group stage and Haaland did not score in any further matches throughout the tournament, he was awarded the Golden Boot as the tournament's best scorer.

On 11 October, Haaland scored his first international hat-trick in Norway's 4–0 victory against Romania in a Nations League B match, taking his total for the senior squad to six goals in six matches played.

During the September 2021 international break, Haaland scored five goals in three World Cup qualifying matches, including a second hat-trick for Norway in a 5–1 win over Gibraltar. 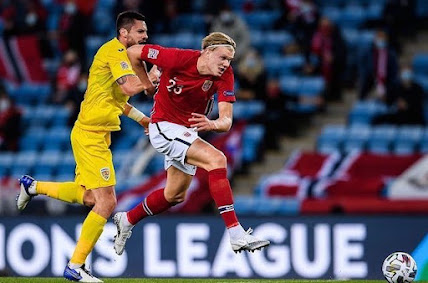