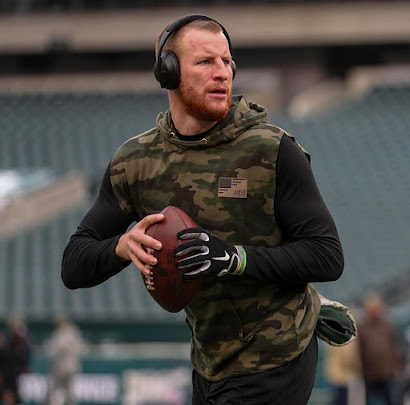 Carson James Wentz is an American football quarterback who plays for the National Football League's Indianapolis Colts (NFL). Wentz earned five NCAA FCS national championships during his college football career at North Dakota State. The Philadelphia Eagles selected him second overall in the 2016 NFL Draft, making him the highest-drafted player in the FCS.

Wentz had the best season of his career in 2017, as he guided the Eagles to an 11–2 record. Wentz lead the Eagles to the top seed in the National Football Conference (NFC), which ended in the franchise's first Super Bowl win in Super Bowl LII, despite suffering a season-ending injury. He was also named to the Pro Bowl and was named to the All-Pro second team.

During his next two seasons, Wentz helped bring Philadelphia back to the playoffs, but injuries forced him to miss the Eagles' 2018–19 playoff run and forced him to leave a 2019–20 Wild Card game early, which was his first postseason appearance. Wentz lost his starting spot to rookie Jalen Hurts in 2020 due to a drop in output. During the following offseason, he was dealt to the Indianapolis Colts.

Wentz was born in Raleigh, North Carolina, and relocated to North Dakota with his family when he was three years old. He was a quarterback and defensive back for the Century High School football team in Bismarck, as well as a basketball and baseball player for the Patriots. He was 5 ft 8 in (1.73 m) tall as a freshman, grew to 6 ft 5 in (1.96 m) as a senior, and graduated as valedictorian of his class in 2011. 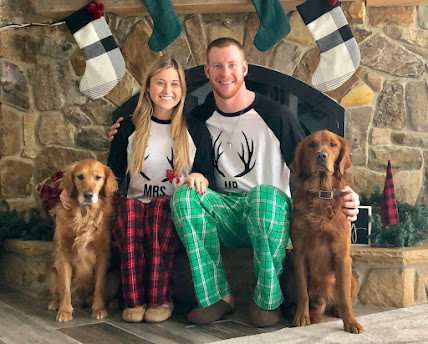 During his junior year in 2014, Wentz took over as the Bison's starting quarterback. On August 30, in his first start, he completed 18-of-28 pass attempts for 204 yards in a 34–14 victory over Iowa State of the Big 12 Conference. On October 10, Wentz grabbed a 16-yard touchdown pass from running back John Crockett to help lead the Bison to a 17–10 comeback victory over Western Illinois.

NDSU won their fourth NCAA Division I Football Championship game in a row, 29–27. Wentz started all 16 games in 2014, throwing for 3,111 yards on 228 of 358 passing attempts with 25 touchdowns and 10 interceptions. With 642 rushing yards and six rushing touchdowns, he was the team's second best rusher.

On October 10, 2015, as a fifth-year senior, Wentz had one of his best games of his career against Northern Iowa, passing for a career-high 335 yards. Wentz broke his wrist in the first half of the following week's game against South Dakota, but he still managed 16-of-28 completions, 195 passing yards, and two touchdown passes as the Bison fell 24–21.

He missed the following eight weeks of the season after starting the first six games of the season and completing 63.7 percent of his throws for 1,454 yards and 16 touchdowns. In early December, he resumed practise and was cleared to compete in the national championship. Wentz had a 4.0 GPA and was twice named Academic All-American of the Year by the College Sports Information Directors of America, first for Division I football and then for all Division I sports, after graduating from NDSU with a degree in health and physical education. 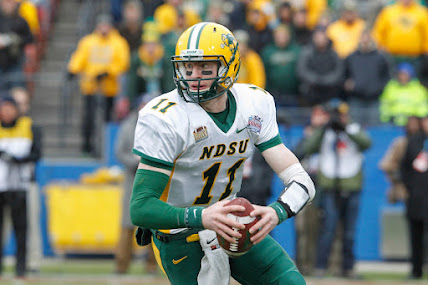 Wentz was anticipated to be picked in the mid-first round of the draught by most analysts in February 2016. Wentz, on the other hand, began to be viewed as a Top 10 prospect following his pro day. He competed in the 2016 Reese's Senior Bowl on January 30, 2016, and concluded the game by completing 6 of 10 pass attempts for 50 yards.

Wentz showed off his athleticism at the NFL Scouting Combine, finishing in the top three among all quarterbacks in the 40-yard dash, broad jump, and three-cone drill. Wentz also received a 40/50 on his Wonderlic test, according to reports. 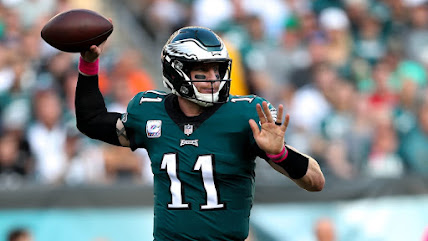 In a 28–23 loss to the New York Giants in Week 9, he completed 27 of 47 passes for 364 yards and two interceptions. Wentz started all 16 games for the Eagles in his first season, which ended with a 7–9 record. Wentz set a league record for a rookie quarterback with 379 completions, beating the previous mark of 354 set by former teammate Sam Bradford, who was with the St. Louis Rams at the time. His 379 completions set a single-season franchise record, surpassing Bradford's prior mark of 346 from the previous season.

Wentz also set a franchise record with 607 pass attempts in a single season, the second most by a rookie in league history. 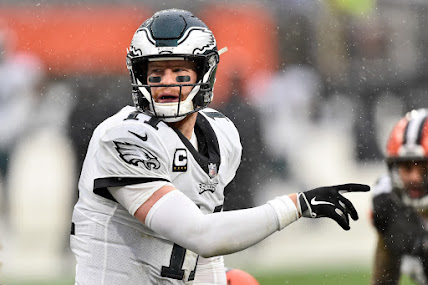 Wentz threw for 307 yards, two touchdowns, and an interception off a throw tipped at the line of scrimmage in the Eagles' 30–17 win over the Washington Redskins in Week 1. Wentz passed for 333 yards, two touchdowns, and one interception in Week 2 against the Kansas City Chiefs. In the 27–20 loss, he also carried for 55 yards. Wentz threw for 304 yards and a career-high four throwing touchdowns in a 34–7 win over the Arizona Cardinals in Week 5. He threw for 1,362 yards and 10 touchdowns with three interceptions in the first five games of 2017.

Wentz was rated as a likely NFL MVP after this start, according to NFL insiders and rumours. Wentz threw for 199 yards and four touchdowns in the Eagles' 51–23 win over the Denver Broncos in Week 9. Wentz left the game against the Los Angeles Rams in Week 14 due to an apparent knee injury. As the Eagles won 43–35, he threw for 291 yards, four touchdowns, and an interception. Wentz won his first NFC East title in the Pederson/Wentz era with the victory. An MRI the next day revealed he had torn his ACL, putting him out for the rest of the season.

Wentz threw for 3,296 yards, 33 touchdowns, seven interceptions, a 60.2 completion percentage, and a 101.9 quarterback rating in 13 starts. Wentz underwent successful ACL surgery on December 13th. On December 19, Wentz was named to his first Pro Bowl, however he was unable to play due to the complications from his recent knee surgery. On the NFL Top 100 Players of 2018, he was ranked third by his teammates. The Eagles defeated the New England Patriots 41–33 in Super Bowl LII, becoming the first team in franchise history to win a Super Bowl. 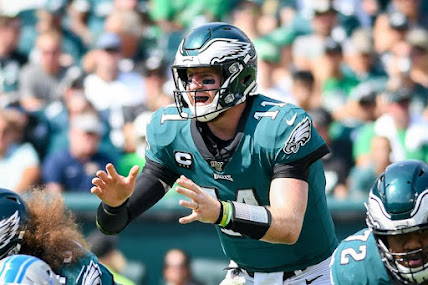 Wentz was ranked third overall in the NFL Top 100 Players of 2018 on June 25, 2018, just before the start of the new season. It's the highest Top 100 debut ranking in the league's history. Wentz sat out the first two games to prolong his recovery from an ACL injury, and Nick Foles took his place as the starter. Wentz was medically cleared on September 17 and was re-instated as the starting quarterback. In the Eagles' 20–16 win over the Indianapolis Colts in Week 3, Wentz threw for 255 yards, one touchdown, and an interception in his 2018 debut.

The Eagles chose to execute Wentz's fifth-year option on April 29, 2019. The Eagles signed Wentz to a four-year, $128 million contract extension with $107 million guaranteed on June 6, 2019, extending his contract through 2024. Wentz threw for 313 yards and three touchdowns in the Eagles' 32–27 win over the Washington Redskins in Week 1. With three passing touchdowns against the Green Bay Packers in Week 4, he helped lead the Eagles to a 34–27 triumph.

In Week 17, Wentz assisted in the Eagles' 34–17 victory over the New York Giants. In the win, Wentz threw for 289 yards and a score, giving the Eagles the NFC East title. 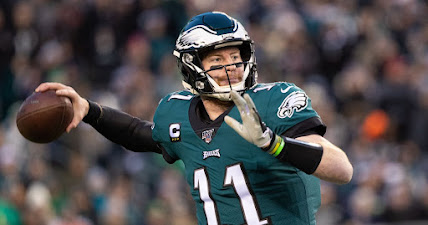 Wentz makes his return from injury against the Washington Redskins in Week 1. Wentz threw for 270 yards, two touchdowns, and two interceptions in a 27–17 loss for the Eagles. The Eagles led the Football Team 17–0 in the second quarter, but they didn't score again for the rest of the game. Wentz was benched by Jalen Hurts in the third quarter of the Eagles' 20–3 loss to the Green Bay Packers in Week 13.

The Eagles went on to lose 16–30 without Wentz. Jalen Hurts was designated the starting quarterback for the Eagles' Week 14 game against the New Orleans Saints on December 8, 2020. Wentz has 21 total touchdowns at the time of his benching (16 passing, 5 rushing). He did, however, lead the league in thrown interceptions (15), total turnovers (19), and sacks (50). Despite only appearing in 12 games, he led the league in all of those categories at the end of the season. 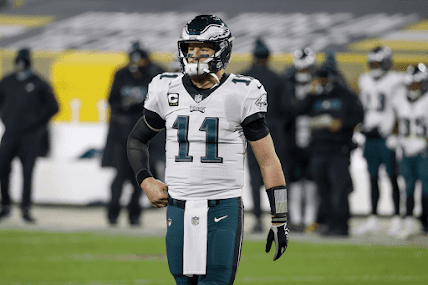 On March 17, 2021, Wentz was traded to the Indianapolis Colts for a 2021 third-round selection and a 2022 conditional second-round pick. He reconnected with Frank Reich, the former coordinator of the Philadelphia Eagles and current head coach of the Indianapolis Colts. Wentz suffered a foot injury during training camp that necessitated surgery. On August 2, 2021, he underwent surgery.

Despite the foot surgery, Wentz was able to return in time for the Colts' season opener against the Seattle Seahawks on September 12 at home, where he completed 25-of-38 passes for 251 yards and two touchdowns, although the Colts lost 28–16. 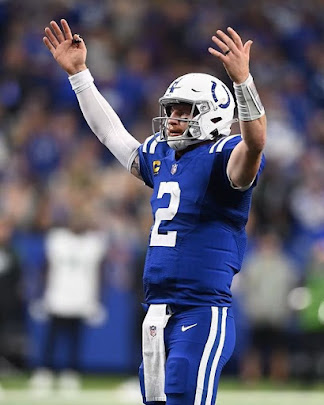 Wentz and his girlfriend, Madison Oberg, announced their engagement on February 6, 2018, two days after the Eagles' Super Bowl LII victory. Wentz and Oberg married on July 16, 2018 in Bucks County, Pennsylvania. Hadley Jayne, his daughter, was born in April 2020. Wentz is a devout follower of Christ. Wentz established the AO1 Foundation in 2017. In 2018, Wentz began a project with Mission of Hope Haiti to construct a sports centre in the country.

On June 1, 2018, Wentz hosted the inaugural annual AO1 Foundation Charity Softball Game at Citizens Bank Park. When 25,000+ spectators attended the event, it was announced that the game raked in over $850,000. During the offseason, Wentz enjoys hunting and visits his home state of North Dakota. He is known for his bond with Major League Baseball player Mike Trout, whom he presented him a ball after a touchdown in a win over the Dallas Cowboys on January 1, 2017. 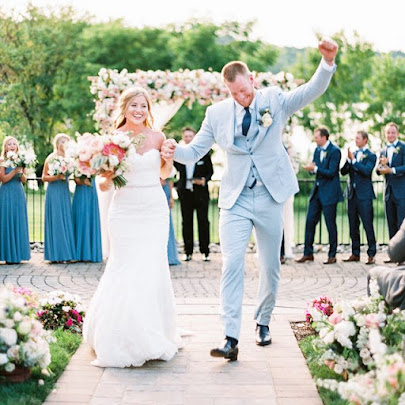