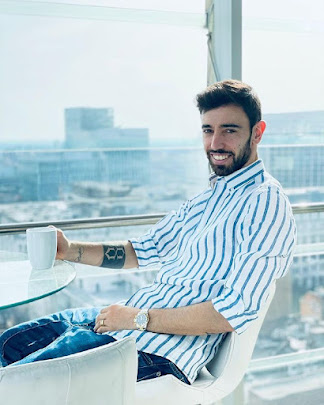 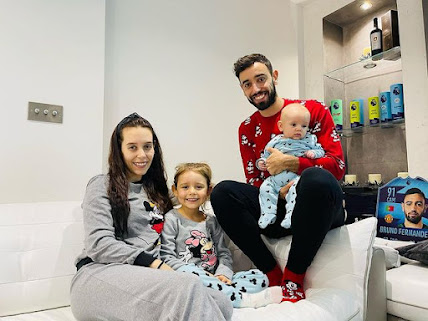 Bruno Miguel Borges Fernandes is a Portuguese professional footballer who currently plays for Manchester United in the Premier League and for the Portugal national team.

Fernandes, who was born in Maia, Porto, began his career in Italian Serie B with Novara before moving to Serie A with Udinese in 2013 and then Sampdoria three years later. In 2017, he signed with Sporting CP, where he was named club captain, after five years in Italy. In 2018 and 2019, he won back-to-back Taças da Liga, as well as the Taça de Portugal, earning him the title of Primeira Liga Player of the Year in both seasons.

He was the highest-scoring Portuguese midfielder and the highest-scoring midfielder in Europe in a single season in 2018–19, scoring 33 goals in all competitions. Fernandes' performances piqued the interest of several Premier League clubs, with Manchester United signing him in January 2020 for an initial fee of €55 million (£47 million), the second-highest fee for a Portuguese player leaving the domestic league.

After being capped at the under-19, under-20, and under-21 levels, Fernandes made his senior debut for Portugal in November 2017. He also competed in the 2016 Summer Olympics for Portugal. He was named to Portugal's squads for the 2018 FIFA World Cup, 2019 UEFA Nations League Finals, and UEFA Euro 2020, winning the latter on home soil and earning a spot in the tournament's Team of the Tournament.

Fernandes, who was born in Maia, Porto's Metropolitan Area, spent the majority of his youth football with local club Boavista FC. He joined Novara Calcio in Italy on August 27, 2012.

Fernandes was promoted to the first team in Serie B after only a few weeks with the youth teams, and he went on to play in slightly more than half of the league games during the 2012–13 season, helping his team to fifth place and the promotion play-offs.

Fernandes signed a co-ownership deal with Udinese Calcio in the summer of 2013. On November 3, he made his Serie A debut, coming on as a second-half substitute in a 0–3 home loss to Inter Milan. 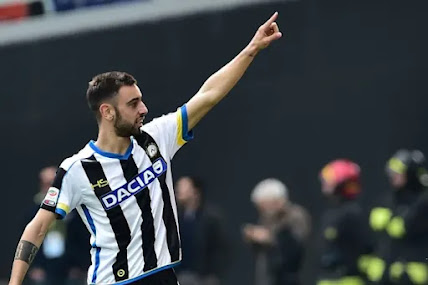 Fernandes joined U.C. Sampdoria on loan with the option to sign a permanent contract on August 16, 2016. Twelve days later, he made his league debut, playing six minutes in a 2–1 home win over Atalanta BC.

On September 26, 2016, in a 1–2 away loss to Cagliari Calcio, Fernandes scored his first goal for his new team. During the season, he scored 5 goals in 33 Serie A appearances, helping them to a tenth-place finish. 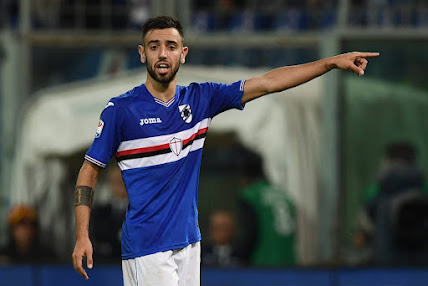 After returning from the UEFA European Under-21 Championship on June 27, 2017, Fernandes signed a five-year contract with Sporting CP for a reported fee of €8.5 million plus bonuses. In his first five games in the Primeira Liga, he scored four goals, including a brace in a 5–0 away win against Vitória de Guimares.

On September 12, Fernandes made his first appearance in the UEFA Champions League group stage, scoring a 3–0 goal in the 43rd minute of Olympiacos FC's eventual 3–2 victory. He scored 16 goals in all competitions in his first season, second only to Bas Dost.

He scored a hat-trick in an 8–1 away rout of Belenenses SAD on May 5, becoming the all-time leading goal scorer for a Portuguese midfielder in a single season, with 31 goals. On May 25, 2019, he scored his 33rd and final goal of the season in Sporting's Taça de Portugal final victory over FC Porto. For the second year in a row, he was named Primeira Liga Player of the Year for his performances in the 2018–19 season.

He scored seven goals in his first ten games of the 2019–20 season, including a six-game scoring streak. After Mário Jardel and Bas Dost, he became the third Sporting player in the twenty-first century to score in six or more consecutive appearances. On November 28, he scored twice and assisted on the other two goals in a 4–0 win over PSV Eindhoven, ensuring Sporting's qualification to the UEFA Europa League knockout stages. 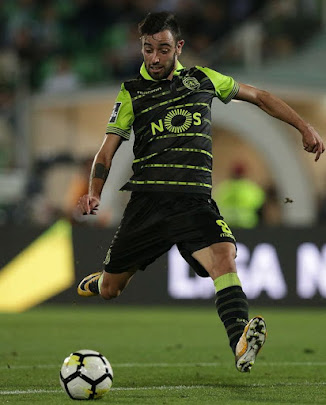 Manchester United announced on January 29, 2020, that they had reached an agreement with Sporting for Fernandes' transfer for a fee of up to €80 million (£67.6 million), subject to the player passing a medical and agreeing to personal terms.

The deal was finalised the next day for an initial fee of around €55 million (£47 million), plus up to €25 million (£21 million) in add-ons and a 10% profit share if United ever sold Fernandes. Fernandes agreed to a five-and-a-half-year deal with the team.

On February 1, he made his debut, playing the entire 90 minutes of a goalless draw against Wolverhampton Wanderers at home. On February 17, he assisted on Manchester United's second goal, a header from Harry Maguire, in their 2–0 away win over Chelsea. On his European debut for Manchester United, Fernandes came on as a late substitute in a 1–1 draw against Club Brugge.

On February 23, he scored his first goal for Manchester United against Watford, converting from the penalty spot in a 3–0 victory at Old Trafford, in which he also provided an assist for Mason Greenwood's third goal.

His first European goal came in the second leg of the club's UEFA Europa League round of 32 tie against Club Brugge at Old Trafford, where he scored a penalty to help them win 5–0. Fernandes was named the Premier League Player of the Month for February on March 16th. In a 3–0 win over Brighton & Hove Albion on June 30, Fernandes scored his first brace for the club.

Fernandes won Manchester United's Sir Matt Busby Player of the Year award in September, which is given to the club's best player from the previous season.

In a 3–2 win over Brighton & Hove Albion at the Amex Stadium on September 26, Fernandes scored his first goal of the season in the 100th minute; it was one of the most recent goals in Premier League history, and came after referee Chris Kavanagh had blown the final whistle before a video assistant referee awarded United a penalty, which Fernandes converted.

Fernandes scored a brace and added an assist in a 3–1 away win over Everton on November 7. In recognition of his four goals and one assist in November, he was named Premier League Player of the Month. After scoring three goals and providing four assists in December, he became the first player to win the award four times in a single calendar year.

Fernandes scored a hat-trick in a 5–1 win over Leeds United in the Premier League season opener on August 14, 2021. 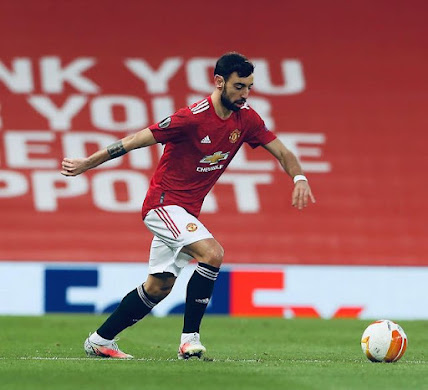 A career in the international arena

Fernandes has played for Portugal at five different levels. Coach Rui Jorge named him captain of the under-21 team before his international debut.

Having gone unnoticed by Portugal throughout his time in Italy, Fernandes was first called up on August 28, 2017, to replace the injured Pizzi for World Cup qualifiers against the Faroe Islands and Hungary the following month, but he did not appear in either match.

Fernandes competed in the 2016 Summer Olympics for Portugal. As the team advanced to the quarter-finals, he started every game.

On November 10, 2017, Fernandes earned his first full cap, replacing Manuel Fernandes for the final 34 minutes of a 3–0 friendly win over Saudi Arabia in Viseu. Fernando Santos then chose him for the 2018 FIFA World Cup in Russia. On the 7th of June, he scored his first goal with a header in the last warm-up match before the tournament, a 3–0 victory against Algeria at the Estádio da Luz.

On 15 June 2018, Fernandes made his World Cup debut, playing 66 minutes in a 3–3 group stage tie against Spain, receiving a booking in the process. 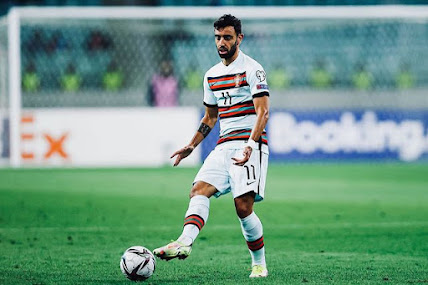 Fernandes, an attacking midfielder, is a dynamic, aggressive box-to-box playmaker who can both take on defenders and dictate the tempo of the game. Fernandes' directness also means he takes a lot of chances with the types and levels of passes he tries to complete, particularly since he often tries to deliver deadly ones. Despite his proclivity for mistakes, he usually pushes the opponent immediately after losing possession.

From his midfield position, Fernandes has a remarkable goal-scoring record. He is a good free-kick and penalty taker and often shoots from outside the penalty box. His off-the-ball mobility is crucial, as he often roams around the offensive areas of the field or drops deep to reclaim control. In addition to playing as an offensive midfielder, he can also play as a deeper centre midfielder or a second striker. 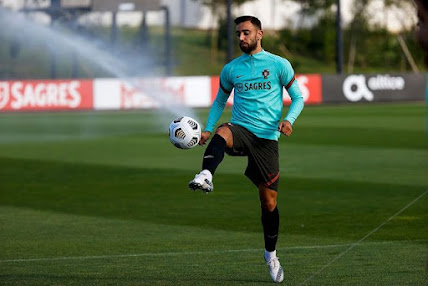