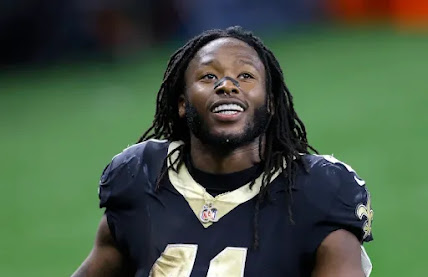 Alvin Mentian Kamara is an American football running back for the National Football League's New Orleans Saints (NFL). He was drafted in the third round of the 2017 NFL Draft by the Saints after playing college football at the University of Tennessee. He was named NFL Rookie of the Year in 2017 and has appeared in all four of his NFL seasons, as well as being a two-time second-team All-Pro. In 2020, Kamara matched Ernie Nevers as the second player in NFL history to score six rushing touchdowns in a single game.

Kamara was born in Liberia to Liberian parents. Norcross High School in Norcross, Georgia was his alma mater. He was a member of the Blue Devils football team in high school. He rushed for 1,300 yards and 17 touchdowns as a junior in 2011. In 2012, he led his high school to its first state championship by rushing for 2,264 yards and 26 touchdowns while also catching 22 passes for 286 yards and five touchdowns.

The Atlanta Journal-Constitution named Kamara Georgia's Mr. Football, as well as Class 6A Player of the Year and first-team All-State honours from the Georgia Sports Writers Association. He was also selected to play in the Under Armour All-America Game in 2013. Kamara was regarded as one of the best running back prospects in the country coming out of high school.

In 2012, he was ranked No. 1 all-purpose back in the 247Composite rankings, No. 5 in Georgia, and No. 42 nationally. Kamara was ranked No. 6 in Georgia by Rivals.com. As a junior in high school, Kamara received a scholarship offer from Syracuse University. As a senior, he committed to play college football for Nick Saban at the University of Alabama.

Kamara described his time at the University of Alabama as 'a trying experience.' He had knee surgery during the preseason and redshirted as a true freshman after failing to break into a recruiting class that included Derrick Henry, T. J. Yeldon, and Kenyan Drake, all of whom are future NFL running backs. Saban barred Kamara from practising with the team and suspended him from the team's bowl game due to 'behavioural issues.'

Kamara redshirted his freshman year at Hutchinson Community College in Kansas after transferring from Alabama. Kamara rushed for 1,211 yards (134.6 per game) and 18 touchdowns in nine games, leading the Blue Dragons in total offence with 1,469 yards and 21 touchdowns. Kamara rose to become one of the top JUCO prospects in the country after a successful season with the Blue Dragons.

Rivals.com and Scout.com both gave him a 5-star rating in their recruiting networks. Tennessee and the Georgia Bulldogs both offered him scholarships before he chose the Volunteers.

Kamara transferred to the University of Tennessee in 2015 to play for Butch Jones, the head coach. Kamara started all 13 games as a redshirt sophomore, sharing the backfield with Jalen Hurd and John Kelly. Tennessee finished with a 9–4 record and earned a spot in the Outback Bowl against Northwestern, which was ranked 12th. He rushed for 53 yards and a touchdown in the 45–6 win over the Wildcats.

During the 2015 season, he rushed for 698 yards (53.7 yards per game) and seven touchdowns. He ranked third in the SEC with 6.5 yards per carry. With 34 receptions for 291 yards and three receiving touchdowns, he was second on the team in receptions. He had eight punt returns for 100 yards (12.5 average) and a touchdown as a punt returner. 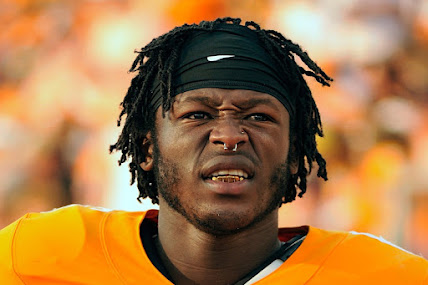 In his redshirt junior season, Kamara was a key contributor for the Volunteers. Kamara's running backs were the same as they were last season. He had six carries for 34 yards and one touchdown in the 45–24 victory over Virginia Tech in the 2016 Pilot Flying J Battle at Bristol. On September 17, he started his first career game at running back for the Vols in a 28–19 victory over Ohio.

He rushed for 127 yards and two touchdowns while also catching eight passes for 161 yards and a touchdown. He was limited to eight carries for 21 yards in the next game against #1 Alabama, but he did have the Vols' lone touchdown in the 49–10 loss. Due to an injury, he missed some playing time. On November 12, he returned with a 49–36 victory over Kentucky. He had 10 carries for 128 yards and two touchdowns against the Wildcats.

He had 55 rushing yards and two more rushing touchdowns in the 63–37 win over Missouri. Kamara decided to forego his redshirt senior season and enter the 2017 NFL Draft after the 2016 season ended. Due to sharing the backfield with Jalen Hurd, he only started eight of the 24 games he played in as a Volunteer, but he amassed nearly 2,000 yards from scrimmage and averaged a touchdown per game. 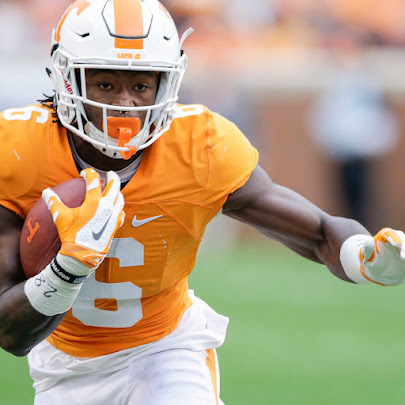 Kamara had the highest Wonderlic test score of all the running backs at that year's NFL Combine. He ran positional routes, the short shuttle, and the three-cone drill with 19 other teammates in front of representatives and scouts from every team at Tennessee's Pro Day. The Carolina Panthers, Chicago Bears, Minnesota Vikings, New Orleans Saints, and Philadelphia Eagles all invited him to five private workouts and visits.

NFL draught experts and analysts projected him as a second-round pick, with NFLDraftScout.com, ESPN, and NFL analyst Mike Mayock ranking him as the fourth-best running back in the draught, fifth-best (Bucky Brooks), or seventh-best (Alex Smith) (by Sports Illustrated).

Kamara was taken in the third round (67th overall) of the 2017 NFL Draft by the New Orleans Saints. He was chosen as the fifth running back in the draught. 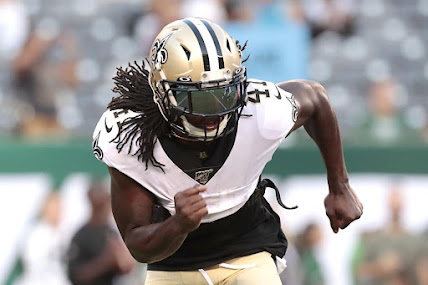 Throughout the 2017 season, Kamara shared backfield duties with Mark Ingram Jr., receiving fewer carries but more receptions than his teammate. Kamara had seven rushes for 18 yards, four receptions for 20 yards, and one kickoff return for 26 yards in the season opener against the Minnesota Vikings on Monday Night Football on September 11. He had 96 yards from scrimmage in Week 4, with 10 receptions for 71 yards and a touchdown catch of 12 yards.

Kamara had 101 receiving yards and 87 rushing yards in a Week 12 loss to the Los Angeles Rams, including a 74-yard rushing touchdown. He was the first non-quarterback to average over 7.0 yards per carry through 12 weeks since the merger, surpassing Herschel Walker's feat of 500 rushing and receiving yards in his first 11 games in 1986. On December 19, 2017, Kamara and Mark Ingram were named to the Pro Bowl as rookies, making them the first-ever pair of running backs from the same team to do so.

Behind rushing leader Kareem Hunt and Leonard Fournette, he finished third among rookies with 728 rushing yards. His 81 receptions ranked first among rookies and second among running backs in the league (behind Le'Veon Bell), while his 826 receiving yards ranked first among running backs. Kamara and Ingram made history by becoming the first running back duo in NFL history to have over 1,500 scrimmage yards in the same season. His 6.07 yards per carry was the most ever by an NFL rookie among non-quarterbacks with 100+ carries. 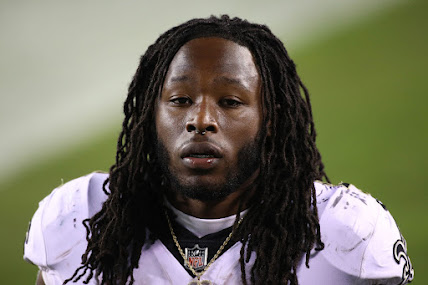 Kamara began the 2018 season as the Saints' primary running back after teammate Mark Ingram Jr. was suspended for the first four games of the regular season. Kamara had eight carries for 29 yards and two rushing touchdowns in the season opener, a 48–40 loss to the Tampa Bay Buccaneers, and nine receptions for 112 yards and a receiving touchdown. After rushing for 66 yards in Week 2 against the Cleveland Browns, Kamara had a career-high 124 yards receiving on 15 receptions in Week 3 against the Atlanta Falcons.

In the NFC Championship game against the Los Angeles Rams, he had eight carries for 15 yards rushing and 11 receptions for 96 yards receiving in a controversial overtime loss of 26–23. On the NFL Top 100 Players of 2019, he was ranked 14th by his teammates. 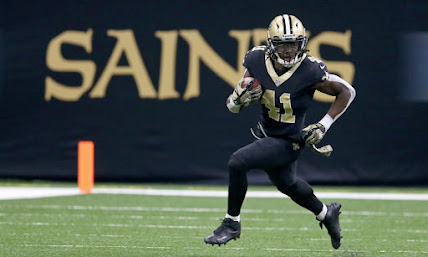 During the 26–20 overtime loss to the Minnesota Vikings in the NFC Wild Card Round, Kamara had seven carries for 21 rushing yards and a rushing touchdown and caught eight passes for 34 receiving yards. 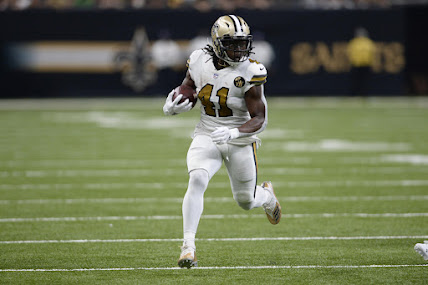 Kamara signed a five-year contract extension worth $75 million the day before the Saints' 2020 season opener.

In Week 3 of the season, Kamara had 58 rushing yards, 139 receiving yards, and two total touchdowns in a 30–37 loss to the Green Bay Packers on Sunday Night Football. Kamara was named NFC Offensive Player of the Week for his performance in Week 16. Due to being placed on the reserve/COVID-19 list on January 1, 2021, Kamara was forced to miss Week 17 against the Panthers.

In total, he had 187 carries for 932 yards and 16 rushing touchdowns in the 2020 regular season, as well as 83 receptions for 756 yards and five receiving touchdowns. His 16 rushing touchdowns tied him for second in the NFL with Dalvin Cook, behind only Derrick Henry's 17 touchdowns. On January 9, 2021, Kamara was activated from the COVID-19 list. Kamara rushed for 99 yards and a touchdown and caught two passes for 17 yards in a 21–9 win over the Chicago Bears in the Wild Card round of the playoffs.

Kamara had 105 yards from scrimmage in a 30–20 loss to the Tampa Bay Buccaneers in the Divisional Round of the playoffs. 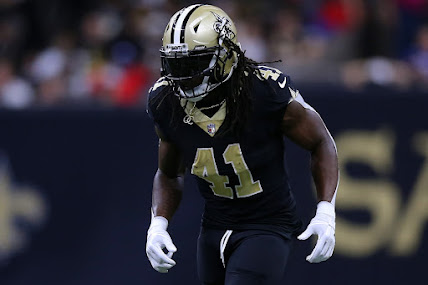 Kamara is the owner of the Big Squeezy juice and smoothie chain, which has locations in Baton Rouge, Hammond, Mandeville, and New Orleans. The chain sponsored Ryan Vargas of the NASCAR Xfinity Series and his No. 6 JD Motorsports car in the Super Start Batteries 188 at the Daytona International Speedway Road Course in February 2021. Kamara was named Growth and Engagement Advisor by NASCAR on June 20, 2021.

He became interested in the sport the previous year after NASCAR and its drivers took part in racial justice activism, such as the sanctioning body's ban on race tracks flying the Confederate battle flag and Bubba Wallace's Black Lives Matter-themed car. 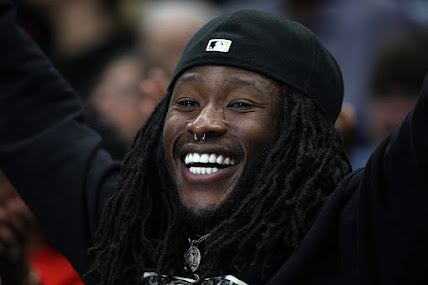