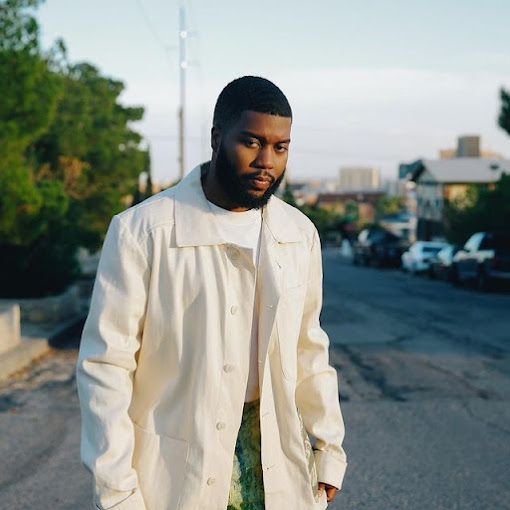 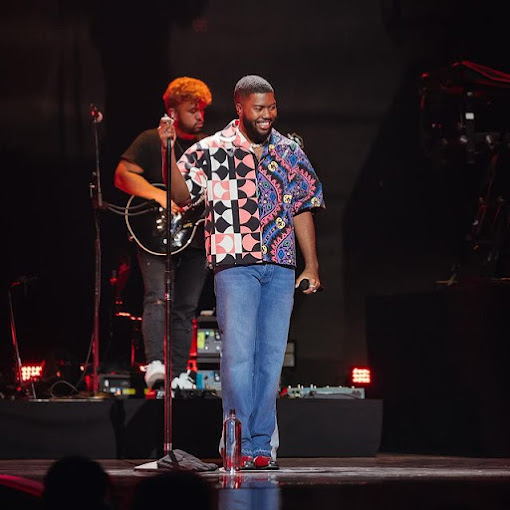 Khalid Donnel Robinson, better known as Khalid, is a singer-songwriter from the United States who is signed to Right Hand Music Group and RCA Records. He came to prominence after the release of his first studio album, American Teen (2017). The album produced the top-20 singles 'Location' and 'Young Dumb & Broke' in the United States, and it was subsequently certified double platinum by the Recording Industry Association of America (RIAA).

Later same year, he was featured alongside Alessia Cara on Logic's US top-ten song, '1-800-273-8255,' which garnered him a Grammy Award nomination for Song of the Year. The following year, Khalid recorded two number-one pop singles, 'Love Lies' with Normani and 'Eastside' with Benny Blanco and Halsey, both of which matched the record for the longest charting songs on the Mainstream Top 40 chart and reached the Billboard Hot 100's top ten.

As the first single off his top-10 EP, Suncity, Khalid released the number-one Rhythmic song, 'Better,' in September 2018. In April 2019, he released Free Spirit, his second studio album, which debuted at the top of the Billboard 200 list. The first song, 'Talk,' reached No. 3 in the United States and garnered him a Grammy Award nomination for Record of the Year. Khalid teamed with Canadian singer Tate McRae on 'Working' in 2021. On June 17, 2021, it was released.

Khalid has been nominated for six Grammy Awards, six Billboard Music Awards, three American Music Awards, and one MTV Video Music Award. Khalid was selected to Time magazine's list of the 100 Most Influential People in 2019.

Robinson was born in the Georgia town of Fort Stewart. Due to his mother's, Linda Wolfe's, and father's military jobs, he spent his youth in a variety of places, including Fort Campbell in Kentucky, Fort Drum in Watertown, New York, and six years in Heidelberg, Germany. Wolfe joined the Army Corps after working as a supply technician. Robinson studied singing and musical theatre in high school.

He spent his first three years of high school at Carthage Central High School in Carthage, New York, before moving with his mother to El Paso, Texas, for his final year, where he attended Americas High School.

In high school, Khalid started writing and producing music, and he shared his early efforts on SoundCloud. Khalid debuted at number two on the Billboard Twitter Emerging Artists list in July 2016, shortly after graduating from Americas High School.

His song 'Location' started charting, and he was featured in many media, including Billboard, Yahoo!, BuzzFeed, and Rolling Stone. 'Location,' which was produced by Syk Sense, Tunji Ige, and Smash David, ended 2016 at number 20 on the US Mainstream R&B/Hip-Hop Airplay chart and entered the Top 10 on the US Hot R&B Songs list on January 21, 2017. The 'Location' music video debuted on The Fader's website. 'Young, Dumb, and Broke,' the album's second song, became a sleeper success, charting at rhythmic formats and moving over to mainstream radio in early 2018.

Alina Baraz's song 'Electric,' featuring Khalid, was released in January 2017. 'Whirlwind,' his collaboration with Brasstracks, was included in the Yours Truly & Adidas Originals Songs from Scratch series and got over 700,000 SoundCloud listens. On March 24, 2017, Khalid provided uncredited vocals to Kendrick Lamar's single 'The Heart Part 4,' which was published. On April 28, 2017, Logic released the song '1-800-273-8255,' which featured Khalid and Alessia Cara and reached at number three on the Billboard Hot 100, becoming Khalid's highest-charting hit.

On his 21-city January–February 2017 Location Tour, he sold out every venue, including El Paso's 1,500-capacity Tricky Falls. His first studio album, American Teen, was released on March 3, 2017, after the conclusion of his tour. At the 2018 Grammy Awards, the album garnered critical praise as well as nominations for Best Urban Contemporary Album and Best R&B Song (for 'Location'). The Recording Industry Association of America (RIAA) certified the album platinum on October 24, 2017 for sales of over 1,000,000 in combined pure sales and album-equivalent units.

Khalid's next song, 'Silence,' was a collaboration with American DJ Marshmello that was released on August 11, 2017 through RCA Records. The song charted in over 28 countries, reaching the Top 200. It topped the Dance charts in Australia, the United Kingdom, and the United States, as well as more than fifteen other countries, including Germany, Sweden, and Norway. It also charted in Hungary, Denmark, Austria, Belgium, and the Netherlands towards the end of the year.

Khalid's collaboration with rapper Swae Lee on 'The Ways' was included in the Marvel blockbuster Black Panther. The song peaked at number 63 on the Billboard Hot 100 on February 23, 2018. In 2017, he worked on Lorde's 'Homemade Dynamite' remix alongside Lorde, SZA, and Post Malone. In 2018, he released 'Love Lies,' a duet with singer Normani recorded for the Love, Simon film soundtrack, which charted in the top ten on the Billboard Hot 100. 'Love Lies' was each artist's first number one single on the US Pop Songs chart, and it also charted in the top 20 on the 2018 Billboard Hot 100 Year-End list.

In May 2018, he co-wrote 'Youth' with Canadian singer Shawn Mendes. The song, which appears on Mendes' self-titled album, makes allusions to the social and political environment of the period. On May 20, 2018, Mendes and Khalid performed 'Youth' as a memorial to the victims of gun violence at the 2018 Billboard Music Awards. The show choir from Marjory Stoneman Douglas High School performed.

He worked with Billie Eilish on the song 'Lovely,' which was sampled many times on Juice Wrld's first album, Goodbye & Good Riddance. In July 2018, he appeared on Benny Blanco's first song 'Eastside' with Halsey. After a record 30-week rise, the song peaked in the top ten of the Billboard Hot 100 and hit number one on the US Pop Songs chart. On September 14, the first day of two local concerts, he also released a song named 'Better.' The song was number one on the Rhythmic Songs airplay chart and peaked in the top five on mainstream radio.

Khalid released the song 'Talk' in February 2019, and he made his Saturday Night Live debut on March 9, 2019, performing 'Talk' and 'Better.' On April 5, 2019, his second studio album, Free Spirit, was released, accompanied with a short film. It debuted at the top of the US Billboard 200 with 202,000 album-equivalent units (including 85,000 pure album sales) in its first week, making it Khalid's first number-one album in the US.

Khalid made history on April 20, 2019, when he became the first and only artist to hold the full top five positions on the Billboard R&B Songs chart.

On April 25, 2019, Billboard magazine revealed that Khalid has a 59-week consecutive run of Hot 100 hits (and counting) since his Normani duet 'Love Lies' debuted on the list in March 2018. Throughout the past year, he charted 12 songs on the Hot 100 (both solo and with features).

To promote the album, Khalid went on his fourth concert tour, dubbed the 'Free Spirit World Tour,' which will begin on May 18, 2019, across North America, Europe, and Oceania and will end on December 5, 2019.

Following the release of Free Spirit, Khalid was claimed to have become the largest worldwide artist on Spotify, overtaking Ariana Grande with 50.4 million monthly listeners on the streaming site. Khalid and Major Lazer released a song named 'Trigger' in October 2019, which was also included on the Death Stranding soundtrack.

Khalid debuted his song 'New Normal' on July 11, 2021, during Richard Branson's Virgin Galactic Unity 22 mission at Spaceport America in New Mexico. Everything Is Changing, his third studio album, will be released in late 2021. 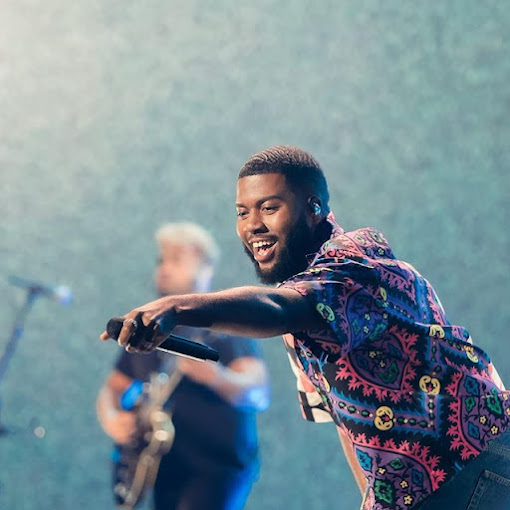 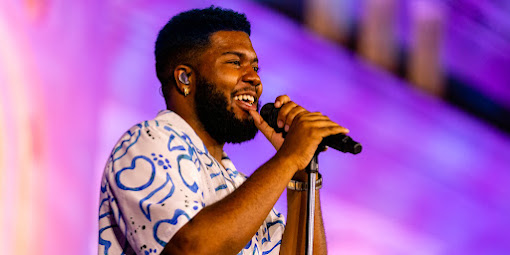