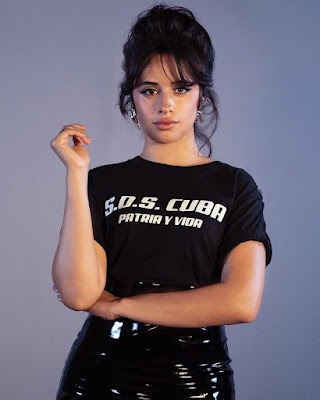 Karla Camila Cabello Estrabao is an American singer and songwriter of Cuban descent. She came to fame as a member of Fifth Harmony, a girl group that was established in 2012 on The X Factor USA and signed a joint record contract with Syco Music and Epic Records. Cabello started her solo career while still a member of Fifth Harmony, with the singles "I Know What You Did Last Summer" with Shawn Mendes and "Bad Things" with Machine Gun Kelly, the latter reaching number four on the US Billboard Hot 100.

Cabello recorded numerous additional collaborations after quitting the trio in late 2016, including "Hey Ma" with Pitbull and J Balvin for The Fate of the Furious soundtrack (2017) and her first solo song "Crying in the Club." Camila (2018), Cabello's first studio album, debuted at number one on the Billboard 200 list. The Latin-influenced pop album was well-received by critics and was certified Platinum by the Recording Industry Association of America (RIAA).

Her first song, "Havana," hit the top of the charts in many countries, including the United States and the United Kingdom, while its follow-up single, "Never Be the Same," reached the top 10 in other nations. Cabello's duet with Mendes, "Seorita," reached No. 1 on the Billboard Hot 100 in 2019. Romance (2019), her second studio album, debuted at number three on the Billboard 200 list and at number one in Canada. Cabello made her acting debut in the 2021 film Cinderella as the title character.

According to the International Federation of the Phonographic Industry, Cabello's "Havana" is the best-selling digital single of 2018, with billions of streams (IFPI). Two Latin Grammy Awards, five American Music Awards, and one Billboard Music Award are among Cabello's many accolades. She's also been nominated for three Grammy Awards.

Cabello was born to Sinuhe Estrabao and Alejandro Cabello in Havana, Cuba. She grew raised in the East Havana village of Cojmar. Her father is a Mexican who migrated to Cuba and was born in Mexico City. Sofia, her younger sister, is her only sibling.

Cabello and her family spent much of their childhood bouncing back and forth between Havana and Mexico City. Cabello moved to Miami, Florida, in the United States with her mother when she was six years old; her father was unable to get a visa at the time and joined the family 18 months later. Cabello became a citizen of the United States in 2008.

She was a student at Miami Palmetto High School until she dropped out in the 2012–2013 school year, while she was in ninth grade, to pursue her singing career. She went on to complete her secondary school education. Cabello was dating Matthew Hussey, a dating coach and writer whom she met on the set of The Today Show. They spanned the months of February 2018 and June 2019.

Shawn Mendes, a Canadian musician, has been her boyfriend since July 2019. Both have been accused of trying to establish a connection for publicity purposes, although Mendes has disputed this, saying that it is "absolutely not a PR ploy." Cabello has said that she suffers from anxiety and obsessive–compulsive disorder. Cabello is now based in Hollywood Hills, Los Angeles, and lives in a Mediterranean-style house.

Tumblr postings reblogged by Cabello between 2012 and 2013 emerged on Twitter in December 2019, including racist slurs and abusive language, including the usage of the epithet "nigger" and mockery of Chris Brown's 2009 attack on Rihanna.

Cabello's Tumblr account was deleted shortly after, and she apologised, saying she was "uneducated and stupid" when she was younger, and that she was very ashamed to have used "awful and cruel" words. She went on to say that "those errors don't reflect" her and that she has "always advocated for love and inclusion." Cabello claimed she reached out to the National Compadres Network, a racial equality organisation, in March 2021 and participated in weekly racial healing workshops, where “you are reprimanded, you have homework, and you learn... Now that I know better, I'll be able to perform better. 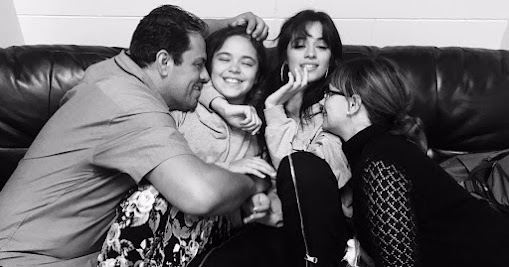 Camila Cabello auditioned for The X Factor in Greensboro, North Carolina, with Aretha Franklin's "Respect," however her audition was not broadcast since the series did not get the song's rights. Cabello was invited back to the stage alongside fellow competitors Ally Brooke, Normani, Lauren Jauregui, and Dinah Jane after being eliminated during the "bootcamp" part of the process in Miami, Florida, to create the girl group that would eventually become known as Fifth Harmony.

Following their third-place finish on the programme, they secured a combined contract with Simon Cowell's Syco Music and L.A. Reid's Epic Records. Along with the studio albums Reflection (2015) and 7/27, the trio released the EP Better Together (2013). (2016). The latter two produced the songs "Worth It" and "Work from Home," which both charted in the top ten in many countries. Cabello was a part of several Fifth Harmony tours from 2013 until the end of 2016.

Cabello teamed with Shawn Mendes, a Canadian singer, on a duet titled "I Know What You Did Last Summer," which they composed together, in November 2015. The song reached number 20 in the United States and number 18 in Canada, earning platinum certification from the Recording Industry Association of America (RIAA). Machine Gun Kelly and Camila Cabello released a collaborative track named "Bad Things" on October 14, 2016, which peaked at number four on the US Billboard Hot 100 singles list.

Cabello was also named to Time magazine's "The 25 Most Influential Teens of 2016" list that year. Cabello's departure was revealed by Fifth Harmony on December 18, 2016, with both parties providing different reasons for her leaving. At the end of 2016, she performed with the ensemble in a previously recorded performance on Dick Clark's New Year's Rockin' Eve. A Billboard writer wrote on Cabello's tenure in the band, saying that it's "very rare for someone to stand out in a collective as much as Cabello has over the previous years.

"Love Incredible," a duet with Norwegian DJ Cashmere Cat, was released online on January 25, 2017. The song's official version was published on February 16, and it was subsequently included on Cashmere's first studio album, 9 (2017). Cabello also collaborated on the soundtrack for The Fate of the Furious alongside rappers Pitbull and J Balvin on "Hey Ma" (2017). On March 10, 2017, the Spanish version of the song and its music video were published, while the English version was released on April 6.

The vocalist was also a part of the "Know No Better" duet with Major Lazer, Travis Scott, and Quavo. Cabello announced the impending release of her debut studio album, The Hurting, in May 2017. The Remedy. "The narrative of my journey from darkness into light, from a period when I was lost to a moment when I rediscovered myself again," she said of The Loving. On May 19, 2017, she released her first solo song "Crying in the Club," which was followed by a performance at the 2017 Billboard Music Awards. In the United States, the single reached number 47.

She was an opening act for Bruno Mars' 24K Magic World Tour in 2017, and she also collaborated with apparel company Guess as the face of their 2017 Fall campaign. Cabello launched her first headlining concert tour as a solo artist, the Never Be the Same Tour, in April 2018. She appeared in the song "Sangria Wine," which she co-wrote with Pharrell Williams. During the tour, Cabello sang the song live. Cabello had a surprise appearance in Maroon 5's "Girls Like You" music video in May 2018. Between the European leg of the Never Be the Same Tour and the opening act for American singer-songwriter Taylor Swift's Reputation Stadium Tour, she started performing.

On July 31, 2018, she performed in front of an arena for the first time at the Mohegan Sun Arena in Uncasville, Connecticut. Cabello was included on the remix version of Bazzi's song "Beautiful." On August 2, the remix was released. Cabello surprised 12 of her greatest fans with a "Most Amazing Mystery Gift & Personal Letter" before releasing the video single "Consequences" on October 9, 2018. Camila was nominated for two Grammys in December 2018: Best Pop Solo Performance for a live rendition of "Havana" and Best Pop Vocal Album.

She was the first female Latin artist to open the event with her performance of "Havana" alongside Ricky Martin, J Balvin, and Young Thug at the opening of the ceremony. Cabello stated in October 2018 that she will begin working on new songs after the holidays in the new year. Cabello was cast in a forthcoming cinematic version of Cinderella, directed by Kay Cannon and produced by Sony Pictures, in April 2019. Cabello and Canadian singer Shawn Mendes released "Seorita" and the music video on June 21, 2019. The song debuted at number two on the Billboard Hot 100 list in the United States, and it's Mendes and Cabello's second collaboration, after 2015's "I Know What You Did Last Summer.

"Seorita" reached number one on the Billboard Hot 100 list in August, becoming Cabello's second number one song. They were nominated for a Grammy Award for Best Pop Duo/Group Performance for their performance. "Seorita" was the third best-selling song in the world in 2019, according to the IFPI. She also collaborated with British singer-songwriter Ed Sheeran and American rapper Cardi B on the song "South of the Border," which was released in July 2019. Cabello teased the release of her second studio album Romance with an Instagram video on September 1, 2019. Two days later, she revealed the album's first two singles: "Liar" and "Shameless," which were released on September 5, and "Cry for Me" and "Easy," which were released in October 2019.

The Romance Tour, which will take place in 2020, will promote the release of Romance, which was published on December 6, 2019. On November 15, 2019, "Living Proof" was released with pre-orders for the album. The song "My Oh My," starring DaBaby, reached number 20 on the Hot 100. Cabello performed at iHeart Media's Living Room Concert for America in mid-March 2020, a fundraiser to raise awareness and money for the COVID-19 epidemic. Cabello released "Don't Go Yet" as the first single off her third studio album Familia on July 23, 2021, which was revealed concurrently with the song's release. 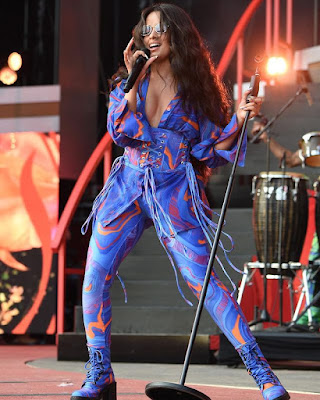 Cabello is mostly a pop and R&B singer with a soprano vocal range. She grew up listening to musicians such as Alejandro Fernández and Celia Cruz. Her first studio album is a pop song with Latin influences. The album includes reggaeton, hip hop, and dancehall influences, and was inspired by current Latin singers such as Calle 13 and J Balvin, as well as Taylor Swift and Ed Sheeran's lyrics. Her sophomore album was influenced by the "big sounds" of the 80s and Queen. She has also mentioned Michael Jackson, Rihanna, Shakira, Alejandro Sanz, Beyoncé, John Mayer, Demi Lovato and Eminem as inspirations. 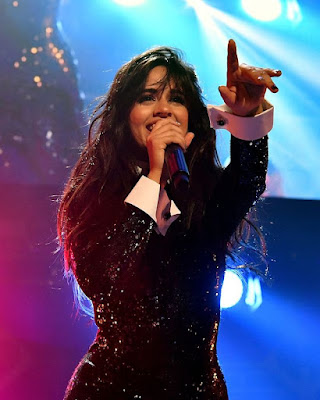 Cabello revealed in February 2016 that she has collaborated with Save the Children to create a limited-edition "Love Only" T-shirt to raise awareness of problems affecting girls' equal access to education, health care, and chances to thrive. Cabello, producer Benny Blanco, and members of the nonprofit arts group OMG Everywhere collaborated on the charity song "Power in Me" in June 2016. Cabello has also collaborated with the Children's Health Fund, a non-profit organisation that provides health care to low-income families with children.

Cabello performed at Zedd's WELCOME! Fundraising Concert on April 3, 2017, which collected funds for the ACLU. On May 8, 2017, Cabello performed for patients at UCLA Mattel Children's Hospital. In late 2017, she collaborated with Lin-Manuel Miranda and many other Latin musicians on the song "Almost Like Praying" for disaster assistance in Puerto Rico. Cabello also stated that all profits from "Havana" will be donated to the ACLU for DREAMers.

Cabello stated in March 2019 that she has given $10,000 to a GoFundMe campaign for a destitute immigrant. Cabello committed to earn $250,000 for the Save the Children charity in September 2019. Cabello performed at the We Can Survive event in October 2019, which raised funds for breast cancer research. Cabello joined Kate Middleton and Prince William at Kensington Palace on October 22, 2019, to support the finalists for the BBC Radio 1 Teen Heroes Awards. 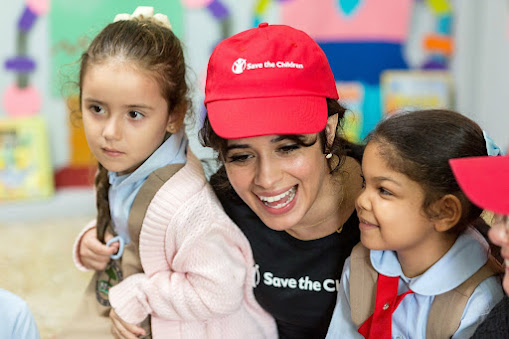